With his bloody war in Ukraine still grabbing most of the headlines, Russian President Vladimir Putin has announced that Russia will be taking on an entirely different challenge for its next conquest. Putin intends to take the Russian Federation to the moon. An unmanned landing is intended to take place later this year, reviving the old Soviet lunar program as part of a collaboration with China to establish a moon base for long-term research operations.

Putin emerged from a weeklong silence to commemorate the 61st anniversary of the first manned space flight, carried out by Soviet cosmonaut Yuri Gagarin.

Asked about the state of the war and the killings in Bucha, Putin preferred to focus on the subject of Gagarin and the legacy of Russian space exploration.

After claiming a number of early victories in the space race the Soviet Union fell behind the United States and the Russian lunar program was shelved indefinitely when the USSR collapsed.

A long-term collaboration with China was announced last year with the intention of reviving the lunar program and ultimately establishing an International Lunar Research Station.

The two countries promised at the time that this facility would be open to other interested countries. Space exploration has long been one of the most stable areas of cooperation between Russia and the West, though the future of that relationship is now very uncertain.

Before the war began, Russia’s plan to send an unmanned mission to the moon later this year was received with some excitement by scientists internationally as an important step towards reviving lunar exploration.

Russia and China focus on space

Putin has now confirmed that the Luna 25 mission will take place as planned this year despite the war in Ukraine and the barrage of sanctions deployed by the West.

The Russian president pointed to the Soviet Union’s success in putting the first man in space despite its isolation as proof that today’s Russia can survive sanctions and continue its space program.

Space, in fact, is one area in which Russia has not been entirely cut off from the United States. NASA has an important symbiotic relationship with its Russian counterpart and both have indicated that they intend to continue that cooperation in spite of events on the ground.

With a major war and a precarious economic situation on his hands it may be challenging for Putin to keep his space program on schedule.

Given America’s relative lack of interest in funding space exploration currently, however, Russia and China may feel that they have an opportunity to take the lead.

A successful lunar mission this year would be an important boost to Russian morale and prestige if Putin can ensure that it goes ahead as planned even with sanctions in place. 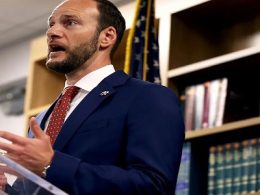 Only in California! The Los Angeles Police Department has recently released body camera footage that depicts an incident that…
bySandy Ravage