Are These Really 21 Turncoat Republicans?

In a desperate bid to stay relevant, “investigative journalist” Carl Bernstein named 21 turncoat Republicans that he claims have made private statements against President Trump.

Bernstein, who uncovered Watergate, and has since made multiple desperate attempts to stay relevant, has come up with a new way to attack President Trump: naming Republicans who he claims secretly hate him.

Though this list definitely includes turncoat “Republicans” such as Mitt Romney, Susan Collins, Lisa Murkowski, and Lamar Alexander, many of the names on the list don’t make sense, such as Tim Scott, Marco Rubio, and Chuck Grassley.

Bernstein claimed that the 21 senators are happy to see Trump defeated “as long as the Senate could be controlled by Republicans.”

In a third tweet, Bernstein took care to ensure that the list was not intended to help the Senators’ post-Trump reputations, stating: “With few exceptions, their craven public silence has helped enable Trump’s most grievous conduct–including undermining and discrediting the US the electoral system.”

President Trump is still refusing to concede the election to Joe Biden, who all major news outlets are now referring to as the president-elect despite the fact that the election results have not been certified in every state, there are numerous allegations of rampant voter fraud and voting irregularities, and the Electoral College has not met to cast their vote.

If it is true that these alleged turncoat Senators have contempt for the president, it is ironic, since it was Trump that saved the Senate and was responsible for huge gains in the House. According to an article from David Harris Jr.’s news site, “Republicans have already flipped 12 seats and if they take the last which is unlikely, they would take control of the House. All 27 toss-up seats went Republican. That is unheard of.”

In response to the leaked Roe v. Wade opinion, leading Democrats are doubling down on their demands for…
byStaff Editor 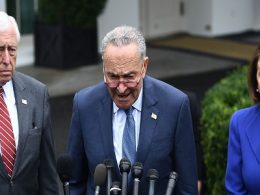 Congress Returns from Recess to Focus on Dem Wish List