CNN was forced to admit that President Biden’s State of the Union Address was received with significantly less enthusiasm than his first address last year. There was some excitement in the mainstream media about the State of the Union Address being a chance for Biden to revive his administration and win back the hearts of the American people. The public does not appear to have been overly impressed.

Most viewers, CNN was quick to note, had a positive view of the speech. 41% were willing to go farther and say that they had a “very positive reaction.”

Both percentages are down from last year. Presidents Obama and Trump each had higher ratings for their second address.

It is also important to note that most of the people who bother to watch a State of the Union Address are likely to be some of the more devoted supporters of a president.

Reactions to this speech are not useful for assessing public approval of Biden as a whole, but they can reveal that Democrats are feeling less enthusiastic about the president than they were last year.

Reactions might have been even more negative were it not for the war in Ukraine. Few things inflate a president’s approval ratings  like a major foreign policy crisis.

Biden devoted much of his speech to Ukraine, but in one gaffe which doesn’t inspire much confidence in his foreign policy, Biden mentioned “the Iranian people” when he was speaking about the Ukrainians.

No major boost in approval ratings

Biden might be winning back some support from Americans who feel the need to rally around the president during an international confrontation, but it clearly isn’t doing as much for him as the White House may have hoped.

Support for the president has historically soared in tense moments like this, when people feel an obligation to put politics aside and support their government.

Unfortunately for the White House, many Republican voters have no interest in pausing their opposition while Biden fumbles his way through this situation.

Democrats devoted much of Biden’s first year in office to depicting conservatives and the right collectively as a domestic terrorism threat, after the whole world watched leftists engage in violent rioting the year before.

This explains why a significant portion of the American right is unwilling to forget about politics and fall in line behind the president’s foreign policy agenda. It also explains why they didn’t bother to watch his speech.

The fact that even Democrats viewing the State of the Union Address were not willing to be entirely uncritical should contradict any claims about Biden using this crisis to revive his flailing presidency.

The sidewalks on Boston have become an area of questionable safety as drug use and homelessness rise. Even…
byStaff Editor 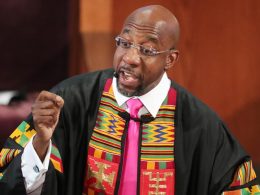 Two serious allegations have emerged against Democrat Senate candidate Raphael Warnock, who is running in the Georgia Senate…
bySandy Ravage