Republicans continue to call out House Speaker Nancy Pelosi over her close ties with Chinese propaganda and the distribution of it on Capitol Hill.

The Washington Free Beacon exclusively revealed that Republican Representative Jim Banks from Indiana has called on the Department of Justice to halt China Daily – a Chinese Communist Party outlet that publishes propaganda. China Daily delivers a communist paper every morning to the Capitol.

Four other House Republicans have joined Banks in requesting Pelosi’s intervention into the matter.

“I assume you are just as outraged as I am by the presence of such disgusting lies in our nation’s legislature,” the letter sent to Speaker Pelosi reads. “This is an opportunity for you to … prove to voters the Democrat Party also takes the China threat seriously. It’s time for you to end the proliferation of Chinese-state propaganda in the United States’ Congress.”

This act comes on the heels of a very divisive time between the United States and China. Back in February, 2020, the Chinese government barred American journalists from reporting on the ever-growing coronavirus outbreak that started in the communist country.

The Trump administration reacted by designating China’s fake news outlets, such as China Daily, as “foreign missions.” President Trump has been warring with China the past few years over unfair trade deals, and the tensions between the two countries keep growing.

"We should never be reliant on a foreign country for the means of our own survival."

The pandemic has shown "how critical it is to have strong borders and a robust manufacturing sector." pic.twitter.com/kNY3YlvmBR

However, this has yet to stop China Daily from continuing to deliver its newspapers to congressional offices – which has gone on for years now. The outlet is consistently spewing anti-American rhetoric, but hundreds of Congress members still receive the Chinese propaganda every morning.

The Department of Justice revealed in federal disclosed files that China Daily has been contributing to spreading propaganda in the United States since 1983. By spending millions of dollars, the outlet has been able to get articles published in top American news sites such as the Washington Post and the New York Times.

This was not the first time Republican politicians have tried to deal with this mounting problem. Back in December, 2019, the Free Beacon reported that Banks, along with 34 other congressional members, asked the Justice Department to look into the matter. The probe reportedly showed that the paper did not comply with federal disclosure requirements, which has been the case for decades.

“There is no question the United States is facing a set of unique challenges right now,” the letter to Pelosi continued. “As we’d expect, our adversaries are trying to take advantage of the moment to undermine America’s global leadership. Perhaps no one is seizing the moment more than China.”

Republicans Keep the Fight Against China

Bank’s persistence concerning the disturbing matter continues, and he has reached out to Pelosi numerous times.

“I sent letters to Congress’s Chief Administrative Officer and to the Chairperson and Ranking Member of the Committee on House Administration asking for help,” the letter reads. “Unfortunately, I didn’t receive any; so, I’m turning to you as Speaker of the House. I ask you: How is Chinese propaganda arriving on my doorstep each morning when the Capitol is closed to the public? And what are you going to do about it?”

As Chinese propaganda continues to infiltrate into American news, people like Rep. Banks are still leading the charge to stop the disintegration of journalistic integrity. 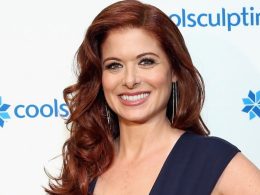 Since she was 10 years old, Elizabeth Catlin’s boobs have not stopped growing. Now, she’s up to a…
bySandy Ravage