One Texas resident didn’t expect to become a victim of theft after making her usual purchase at a local 7-Eleven, but thanks to a credit card skimmer on the card reader that drained her bank account, she was.

Nyshje Rattler recorded a video of her discovery and shared it on TikTok.

She told NBC-DFW that she first discovered something was wrong when she tried to buy a bag of potato chips at a convenience store and was informed that she had insufficient funds.

“They said: You don’t have the money. And I said: Excuse me?” she told the news outlet. 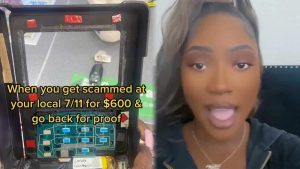 Worried about what was happening, she contacted her bank and was informed that her account had been ‘wiped clean.’

She says that her bank told her there were numerous transactions made on her account.

She then recalled making a purchase on Monday night at the 7-Eleven along Medical Center Drive where she typically makes small purchases about five times a week.

“He was obsessive about how I placed the pen down so I thought that was weird,” Rattler said. “I kept replaying it in my head.”

Thinking about what happened, she recalled credit card skimmers in Los Angeles and decided to return to the store to inspect both of its card readers.

“I compared the two and I noticed that the one I grabbed was bulkier on the side, kind of sticking out. It wasn’t flat like they said. So, I just lifted it up and it came up,” she said.

Speaking with local news outlet KTVT-TV, police said: “The skimmer is made up of a replacement cover, likely purchased online by a criminal, outfitted with a computer board that can be accessed wirelessly, and placed on top of the store’s identical credit card reader.”

The case has been handed over to McKinney Police who are now investigating.

Meanwhile, the video Rattler posted on TitTok went viral, and has been viewed over 21 million times in its first week. This case can serve as a lesson to everyone to be aware of their surroundings. Anyone can become a victim at any time. 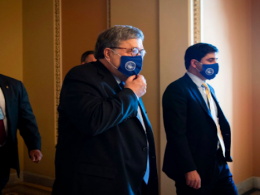 A key battleground state is preparing to perform an election audit, as lawmakers are determined to know what…
bySandy Ravage

While some may view the recent U.S. airstrikes in Syria against an Iranian-aligned target as a positive turning…
byStaff Editor

Jen Psaki is condemning a Florida bill protecting the rights of parents as “horrific” and “bullying,” despite the…
bySandy Ravage

Michigan attorney Matthew DePerno has filed his latest findings with the Circuit Court, including a startling revelation that…
bySandy Ravage