Former Secretary of State and Director of the CIA Mike Pompeo sat down with CBN’s The 700 Club’s Pat Robertson to discuss topics foreign and domestic, and revealed the “biggest threat” to America. The interview was explosive and revealed the inner understanding that Pompeo and the whole Trump White House has of the world, the truths the Biden-Harris regime has chosen to be willfully blind to.

Pompeo sat down with the cheerful and still extremely astute 91 year-old televangelist turned politicial commentator, who pulled no punches on the affable former spy chief.

The Biggest Threat Is Always Inside

Mr. Pompeo’s first comment though should shake the American people to the core and have the knowing on the right nodding solemnly. Asked by Mr. Robertson if China is the greatest threat to the United States. Pompeo said,

“Look, the biggest threat is always inside the United States, if the Republicans default it will happen because we don’t defend our own institutions, but far and away the largest foreign adversary is the Chinese Communist Party.

They are atheists; they are adopting policies that look very much like the communism of the Soviet Union and the Marxist-Leninist ideas but with 1.4 billion people and a massive military and a significant economy as well. They present to those of us who are Christian believers and all Americans the most existential threat to the United States that we have seen for decades and decades.”

Many outlets like the Daily Wire, honed in on Pompeo’s comments on Russia and criticism of Obama’s ‘Pivot to Asia.’ and Pompeo’s assertion of his America First Diplomatic doctrine mirroring Reagan when he described “Peace through strength” and the dangers of an administration being viewed as weak.

What many outlets missed out on though, was Pompeo’s incredible turn discussing domestic issues, which are typically outside the purview of a Secretary of State, but with his years of CIA experience Mike Pompeo’s gaze is a bit broader, and it showed through when he identified that “the biggest threat is always inside the United States,”

The Politics of Spite

Referring to the crisis at the border, Secretary Pompeo answered Robertson’s observation that Biden seems intent to undo everything that Trump did.

“He’s moved pretty fast to undo an awful lot. It’s unfortunate because I think some of the things that they’ve undone: it’s just spiteful. It is, there wasn’t a lot of policy consideration, right? The mess that we have at the border today: theres no logic in having undone these things that we built over four years.

These weren’t partisan things. These were just…Every nation controls it’s border and what flows across it’s border. And they chose to sort of pull the pins out of the Jenga puzzle, and of course it now has collapsed on top of them with an enormous humanitarian crisis and I regret that. Look they have different views on some things, so be it. But theres no need to just go undo things just for the sake of undoing them.”

Pompeo On Standing Against the Tide of Socialism

Robertson remarked on the Biden-Harris regime’s “massive thrust to push this country into sort of a Socialist morass” mentioning the massive spending called for in Biden’s speech to a “Joint-Session of Congress” which definitely wasn’t a State of the Union Address, the implementation of the 1619 project in classrooms and claiming that America is a “racist society” and asked what can we do about it?

“It always starts with Prayer and then it takes action. It takes people supporting remarkable organizations that are out there fighting on our behalf on the things that christian believers hold most dear. It takes political leaders with backbone,  who are prepared to push back against it.

We don’t have the numbers today at the Federal level, but we do in the States. And we may well again by the next election cycle. So we need to resist all of these efforts to put the government in every corner of our lives. You would’ve seen too they’re proposing legislation, one of them is called the equality act that poses real risk to organizations like the 700 club. Organizations that simply want to evangelize and speak to their own Christian faith and how we as American citizens should behave in the world.

These are dangerous ideas, and our responsibility, each of us, wherever we are– I’m just a private citizen today– each of us has a responsibility to do everything we can to push back against it. To do so in a way that is faithful to our saviour and mindful of the importance of American, not only to all of us , and our children and grandchildren but to the world as well.”

Fmr. Secretary Pompeo is reportedly working with multiple campaigns for the House of Representatives and the Senate to reclaim Congressional control in 2022 and he seemed very hopeful but urged more people to get involved and compete for those seats.

“We think we can get the majority back and if we can: the worst excesses of the Biden administration the things that he really wants to do to structurally undermine the United States can be stopped.”

Pompeo’s interview closed with him urging people to push back on HR1, which would allow the Federal Government to dictate election law to all 50 states. He stressed that even many Democrats see the inherent danger of the law. He told Robertson “we need to continue to make the case and make the argument and put pressure on them (Democrats) not to let HR1 become law.” 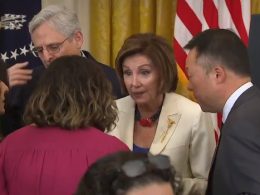