West Virginia DINO Senator Joe Manchin has been trying to get through to Joe Biden but hasn’t been getting his message across. He’s reached the bang on a table and shout “read my lips, Joe” stage. “I will not support a reconciliation package that expands social programs and irresponsibly adds to our $29 trillion in national debt.” Democrats don’t want to hear that. Rank and file socialists would spend three times as much, if they had their way.

Manchin says ‘told ya so’

Bernie Sanders is turning purple over concession cuts that Manchin already squeezed out of the Imperial Palace negotiators. Meanwhile, the West Virginia Senator is pointing to the Republican victory in his sister state of Virginia as proof his predictive warnings just came true.

He’s been shouting it from the rooftops for months and now it’s time to gloat, “I told you so.”

“It’s unbelievable to see what went on in Virginia and not just from the governor’s race but all the way down that ticket a good bit of change has happened.”

Conservatives captured “wins in the elections for governor, lieutenant governor, and attorney general.” Manchin tells his Democrat colleagues to read between the lines. “You can read so much into all of that last night. I think it should be a call to all of us have to be more attentive to the people back home.”

Kyrstin Sinema gets that message loud and clear. Along with Manchin, she’s the other DINO holdout standing in the way of Democrat Deep State domination.

Sinema knows full well that she only gets to keep her job by making the voters in Arizona happy. Especially, the independent ones. They have more conservative clout than the RINO infested GOP does in the state.

Manchin also noted that the New Jersey governor’s race didn’t quite go as planned. Officially, it’s “too close to call” but there are indignant rumors swirling over 40,000 votes that popped up overnight like mushrooms. After the precinct had declared victory for the Republican and a 100% tally, it flipped the other way by dawn. Then there is the inflation problem. He thinks Joe Biden is chasing rabbits down a deep dark hole full of hallucinations.

For “us to go down a path that we’ve been going and trying to accelerate it and it has been slowed down – I think we need to take our time and do it right.” Otherwise they’ll end up politically floating face down in the hot tub like Hunter Biden on a crack binge.

Senator Manchin is smart enough to realize that simply saying “shut up and drink the Kool-Aid” doesn’t create much harmony. “We have a divided country that needs to be united and you can’t unite it by just doing it by one-party system.”

He wants to see Nancy Pelosi pass an infrastructure bill but the plan to spend our way out of bankruptcy with family leave and amnesty for every illegal won’t fly.

The Senator got passionate and thundered, “how can I in good conscience vote for a bill that proposes massive expansion to social programs when vital programs like Social Security and Medicare faces insolvency and benefits could start being reduced as soon as 2026 in Medicare and 2033 in Social Security? How does that make sense?”

Manchin isn’t happy that our so called “elected leaders continue to ignore exploding inflation, that our national debt continues to grow and interest payments on the debt will start to rapidly increase when the Fed has to start raising interest rates to try to slow down this runaway inflation.”

The first attack of the Second American Civil War was not a physical one, there was no cannonball…
byMatthew Holloway 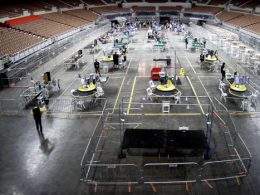 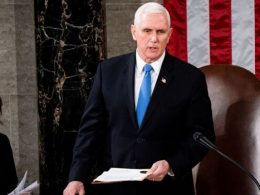