True racism coming from the left is being allowed to fester on social media. A recent “Twitter Space” meeting went viral after a black man stated that he supported white genocide.

According to reporting from Louder With Crowder, these lunatics have been “making use of Twitter Spaces to host a meeting of dyed-in-the-wool racists—not the kind the left likes to scream and cry about because someone mispronounces a name—there was no mincing of words between parties. They truly hate white people, and they want them dead.”

The social media drama began when one racist decided to post a video listing off his favorite racial slurs for white people.

I think some people don’t like white people…. pic.twitter.com/tznB7zbmbW

It soon turned into a meme, and got worse from there. The hashtag #MayoMonkeysGottaGo began trending on Twitter.

What in the hell pic.twitter.com/MgpQZuEcum

Louder With Crowder writes: “It soon became clear that those trending #MayoMonkeysGottaGo, which came from a giant list published to Twitter earlier, would probably enjoy, immensely, if white people were tortured as Fauci likes to torture monkeys. But then they also want them dead, like Fauci likes to do to puppies. Don’t take my word for it.”

Then came the worst of it. A “Twitter Space” meeting of only black people began talking about white genocide.

“I’m going to say this, and you ain’t gotta chop shit up. I am for the white genocide. I am for the total erasure of the white race… Yes, I am for all you white bitches dying like flies… I am for putting all you white opossums in a gas chamber and letting that motherf*cker rain,” said one of the participants.

This is what they really think of anyone who disagrees with them. The media and the woke left caused a race war. https://t.co/DG3dhBDIx0

The man who made these comments later deleted his Twitter account. It is unknown what the reasons behind his decision to leave the social media platform were, but it is safe to assume that he received significant backlash for his statements. 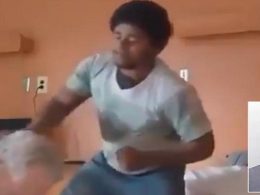 Democrats often forget that the internet is forever, and their past posts are coming back to haunt them…
bySandy Ravage