Former White House Chief of Staff Mark Meadows has slapped Democrat Speaker of the House Nancy Pelosi and members of the January 6th Committee with a lawsuit.

Mark Meadows is fighting back after the January 6th Committee referred him for criminal prosecution for not complying with contempt proceedings. He was asked to come in and testify, but could not come to an agreement with the committee because they would not agree to not question him about things that are protected by executive privilege.

Meadows’ legal team has stated that the committee has repeatedly demanded records and testimony that are protected by executive privilege. So now, the former chief of staff has no other choice but to refuse to cooperate. Of course, the committee’s response to that was to refer him for criminal prosecution. But they didn’t expect him to fight back.

The lawsuit against Pelosi and the committee states: “The Select Committee acts absent any valid legislative power and threatens to violate longstanding principles of executive privilege and immunity that are of constitutional origin and dimension.”

Alongside this charge, Meadows also challenges the legitimacy of the January 6th investigation, referring to it as a “partisan witch hunt” and “a show trial with no legislative purpose.”

Looking at the committee, it appears that Meadows is correct. Pelosi prevented any legitimate Republicans from joining, only allowing RINO Representatives Liz Cheney and Adam Kinzinger to join the 7 Democrats in their attempt to find some connection between Donald Trump (or anyone close to him) and the January 6th Capitol riot.

According to Meadows’ lawsuit, the committee has gone too far by issuing subpoenas that target private citizens, and even demanding phone records, just for exercising their First Amendment right to protest. These subpoenas even target people who had no involvement with the Capitol protest on January 6th.

“The subpoenas issued to Mark Meadows and Verizon were issued by the Select Committee as part of an unconstitutional attempt to usurp the Executive Branch’s authority to enforce the law and to expose what the Select Committee believes to be problematic actions by a political opponent. Congress has no authority to issue subpoenas for these purposes,” the lawsuit states.

Biden Team Finally Admitted To It 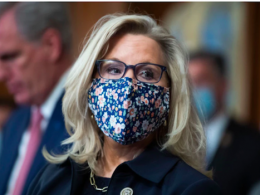 Multiple agencies were called to a home near Bartow, West Virginia for reports of a hostage situation. As…
byAnastasia Boushee