While the left focused on the finances of Donald Trump, who actually lost money while in office, one Fox News host delved into Nancy Pelosi’s finances to uncover how she became so wealthy in the decades she has been living off of our taxpayer dollars.

Nancy Pelosi has been in Congress for nearly 34 years, and is currently one of the most powerful politicians in the United States in her position as Speaker of the House. Despite having a salary in the low six-figures, Pelosi is one of the richest members of Congress. It appears that while her policies are destroying the economy, she is reaping the rewards.

According to Fox News host Jesse Watters, Pelosi’s policies make it “harder and harder for average Americans to accumulate wealth,” shackling them with taxes and “destroying the dollar with reckless spending.”

Because of this, Watters decided to launch a “Watters’ World” investigation into her financial dealings throughout her time in Congress.

What is Pelosi’s secret? According to Watters, “It appears to be her husband, Paul.”

“After they got married, Paul opened up a real estate and venture capital firm. And through his connections, he pushed Nancy into the political world, helping her get elected to Congress in 1987,” the Fox News host said.

“The couple has timed the market perfectly over the years, while Nancy’s been a Washington insider. Real estate, stocks, the Pelosis always know what the right investment is,” he added.

Nancy Pelosi and her husband own several pieces of real estate throughout the country, including a $25 million Napa Valley mansion, a $2 million waterfront condo in Washington, D.C., and a multimillion-dollar red brick mansion in California’s Pacific Heights. Paul Pelosi also owns several commercial properties in San Francisco which, combined, are worth up to $50 million.

“Since regaining the gavel in 2018, the Pelosis’ wealth has skyrocketed,” Watters said. “That year, her financial disclosure report revealed a net worth of over $114 million. Then, in 2019, Pelosi’s assets totaled up to a whopping $271 million, and in 2020, those numbers went up even more to as high as $315 million.”

“In 2007, Visa worried the new Democrat Congress would target their swipe fees, costing them billions. So they hired a team of lobbyists who descended on Pelosi,” he added. “Visa’s CEO personally met with her. She got donations from them. One of Nancy’s advisers left and became a Visa lobbyist himself.”

“Suddenly, Paul Pelosi got a phone call from his broker. He was in luck,” Watters continued. “Paul was offered a prescreened invite to get in early on Visa’s $18 billion IPO. Did Nancy and her husband hesitate? No, they bought between $1 million and $5 million worth of Visa stock. But it gets better. While Pelosi was speaker, bills that would have hurt Visa’s stock price were blocked in the House. Visa shares going up over 200 percent during the time, making the Pelosis a fortune on paper.”

Of course, that’s not the end of it. Nancy and her husband continued to benefit from early knowledge about the stock market.

“In March, Paul Pelosi exercised $2 million worth of Microsoft options, just two weeks before the tech giant got a $22 billion contract to equip the US Army with high tech headsets,” Watters said.

“In January, the Pelosis got a million dollars worth of Tesla stock right before Joe Biden announced electric car incentives. In June, the Pelosi family cashed in big time just before Congress was set to pounce on Big Tech: Mr. Pelosi exercised options on Google’s parent company, Alphabet, making an easy $5.3 million,” he added.

“To be fair, the Pelosis have never been indicted for insider trading, but her marriage, investments, and access, combined with extremely fortunate timing, have created a lot of suspicions. All we’re doing is following the money, and there sure is a lot of it,” Watters concluded. 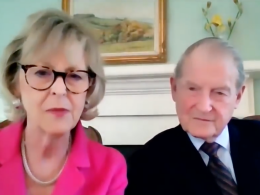