Myrtle Brown vanished in 1990 when she went to visit friends in New York, now over 30 years later, we finally learn the truth about what happened to her.

During the program, Brown discovered an image that showed the team’s reconstruction of a facial feature in the report.

“I saw a young lady that could be or could not have been my sister,” he told NBC. “And I said to myself, ‘Wow, I wonder if that could be her.’”

Robert called the cold case team, believing the identified woman he saw on TV to be his sister, however they revealed that it was not her.

However, the medical examiner’s office soon began to look deeper into Myrtle’s disappearance, according to Dr. Angela Soler.

“I took a look at the reconstruction and noticed, OK, I’m probably looking for a middle-aged Black woman,” Soler told NBC. “It all matched with what the family was telling us, and we were also informed that she went missing in May of 1990. So I knew exactly where to start my search.”

After reviewing records, Soler discovered an unidentified body in a replica of a home that matched Myrtle’s missing date after beginning the search on May 1, 1990.

“In this instance, the contextual information included the date that she passed away,” Soler added “She passed away in Brooklyn, which matched the family telling me that she used to receive medical care in Brooklyn.”

Soler called Robert to notify him she could have located his sister after three decades.

“She sent a photo to both of us, and it took me a second to realize that’s her,” Robert said.

NBC News reported that Myrtle’s purse had been stolen in May 1990, which held her epilepsy medicine and ID.

Later that evening, she went to the emergency room due to not feeling well and needing a refill of her prescription. After that point, her family never heard from her again.

Soler provided the details she discovered in the case file. While Myrtle had never been hospitalized or registered at the hospital, she had been there when she experienced a seizure and passed away.

At the time, Myrtle was only able to provide the hospital with her name and date of birth.

Her family is now at rest knowing what happened to their mother and sister.

Bill Clinton Just Said Something About ALIENS That's Totally Out OF This World...

Bizarre Incident on Highway Makes For a Messy Clean-Up 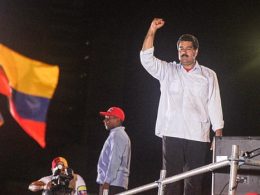 Pleaded Guilty and Sentenced to 20 YEARS in Prison

Abdullahi Ahmed Abdullahi, 37, a Somali Islamist formerly of San Diego and prior to that Minneapolis, was convicted…
byStaff Editor