After a break from the spotlight, attorney Sidney Powell has re-emerged with a massive announcement. During a recent interview, Powell outlined a path to overturning the 2020 election if fraud is uncovered.

With election audits proposed or underway in multiple states, many have speculated as to what would happen if enough fraud was discovered to nullify Joe Biden’s “victory.” Powell has an answer.

Concerns About Fraud Are Widespread

According to another poll from Reuters/Ipsos, 68 percent of Republicans are concerned that the election was “rigged,” while 16% of Democrats and one-third of independents were similarly concerned.

Path Back to President Trump

In the interview, Sidney Powell said that the election audits in Arizona and other states could possibly find hard evidence of fraud, which would render their election results invalid.

Powell stressed the importance of the ongoing audits and noted that the American people deserve as much transparency as possible surrounding the election. She detailed the next steps after the audits, should they find anything illegal occurred, insisting that state legislators “have the power to recall the electors for fraud.”

According to Powell, fraud could destroy the legal validity of the 2020 election, leaving state legislatures with no choice but to decertify the results, removing electoral college votes from Joe Biden‘s count.

“Fraud vitiates or disposes of everything, undoes everything that wrongfully happened as a result of that fraud… They ought to have to give us our President back, because we the people, as my new t-shirt says, know Trump won,” she explained.

Sidney Powell also claimed that officials in certain states may be covering up the fraud in an attempt to protect the political system, asserting that this could lead to more dangerous consequences in the long term.

Sidney Powell (6/25) suggests that the election can be overturned by recalling electors for fraud. pic.twitter.com/GXZSEQv0If

Delta Removed Another Passenger For Expressing His First Amendment Rights!

A member of the ongoing Truckers for Freedom convoy in Washington, D.C. was removed from a Delta Airlines…
bySandy Ravage 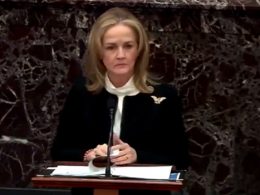