A high ranking BLM member was just caught using her fame and fortune — which she gained through exploiting the BLM movement — to buy herself a $1.4 million home in a majority-white neighborhood.

Patrisse Khan-Cullors, 37, who is one of the founders of the Black Lives Matter (BLM) movement, recently purchased a home in a secluded area of Los Angeles that has less than a 2% population of black people. The New York Post has also reported that Cullors has bought three other homes in recent years, including a three-bedroom home in Inglewood for $510,000, a four-bedroom home in South L.A. for $590,000, and a ‘custom ranch’ on 3.2 acres in Conyers, Georgia for $415,000.

Cullors, a self-described marxist, was attacked on Twitter from both sides of the aisle for her hypocrisy

“If you go around calling yourself a socialist, you have to ask how much of her own personal money is going to charitable causes,” said Hawk Newsome, the head of Black Lives Matter Greater New York City, who is now calling for a probe into Cullors’ finances.

According to the Associated Press, Black Lives Matter took in around $90 million in donations in 2020. It is unclear how Cullors is paid by the organization, as BLM’s finances are opaque.

On the right, the biggest hits against the Marxist BLM leader came from black conservatives.

In a tweet that has since been removed for ‘violating Twitter rules,’ Outkick’s Jason Whitlock commented, “Black Lives Matter founder buys $1.4 million home in Topanga, which has a black population of 1.4%. She’s with her people!”

Jamil Jivani, the founder of the Policing Literacy Initiative, replied to Whitlock’s tweet, writing, “I can’t believe how badly some people got played by BLM. Wow.”

I can't believe how badly some people got played by BLM.

Whitlock has been calling out BLM and ANTIFA for a while. Back in January, he compared the two terrorist organizations to the Ku Klux Klan, stating that they act as the modern-day “enforcement arm” of the Democrat Party.

Fox News host Tucker Carlson asked Whitlock, “You mentioned the BLM movement that really kind of took over a lot of the country, funded by our most powerful corporations over the summer. That is a political movement. Put it in context for us. What would you compare that to?”

“Well, I compare Black Lives Matter to the KKK. I really do,” Whitlock replied. “And some people don’t understand it, but if you go back to the 1860s, after the Emancipation Proclamation, the KKK was started, and it was the enforcement arm of the Democratic Party. And what’s the enforcement arm of the Democratic Party right now? Black Lives Matter and Antifa. They will come to your home and violate your home, try to intimidate the people in your home if they disagree with you politically.”

“Black Lives Matter [is] a Marxist organization,” he added. “Marxism is hostile towards religion; that’s why I’m glad you went there today. These are atheist values being expressed from our leaders, demonizing individual citizens here in America, branding them as white supremacists because they decided, because we disagree with their opinion about something. This is lunacy. And it’s dangerous.”

If Patrisse Khan-Cullors really is a “Marxist,” she wouldn’t be making enough money to buy a $1.4 million home. A true Marxist would be redistributing their money to the poor. What Cullors really is, is a race hustler and a grifter, just in it for the money. This proves it. 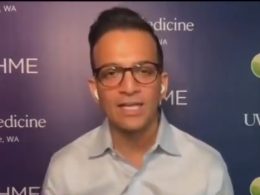