Attorney General William Barr finally made a decisive move on Thursday, to do something about the alleged election fraud, sending federal investigators to Michigan to follow up on a startling admission from a Post Office whistleblower. The furious mail handler demands to know, “How are we going to have any integrity in this country if we are just going to let things slide?” The AG agreed and sent in the troops.

Patriots across America are closely watching the protracted vote counting process, worried that the Democrat fix is in. Warning signs have been in the air for months and everything seems to be proceeding just as predicted. It looks an awful lot like President Donald Trump won the election and the Deep State is trying real hard to steal it from him. Nobody is going to believe the results unless every single vote is verified as valid before it gets counted. Attorney General Barr agrees and took steps to do something about it.

No matter how angry it makes Democrats, they can’t stop William Barr from sending in armed poll watchers to the rooms with the boarded up windows, where nobody wants anyone to watch the counting. It’s time to “Stop the Steal” American patriots declare.

Early on Wednesday, as confirmed by three knowledgeable insiders, Department of Justice official Richard Donoghue sent an email at 1:30 a.m. clarifying that the law which “bans armed federal authorities from being at the polls on Election Day does not apply to polling stations and locations that are counting ballots after that day.” That decision cleared the way for Barr to make it happen.

What is happening in Michigan is beyond corrupt.

A whistleblower within the @USPS says he was ORDERED by his supervisor to ILLEGALLY BACK-DATE newly found ballots to November 3rd, 2020.

The cavalry has finally arrived

Speculation as to when the special investigators would hit the streets didn’t last long because as local news in Michigan reports, “the cavalry has finally arrived.” They were sent in to investigate whistleblower claims that ballots were being rushed off to be counted the day after the election. It seems that the Post Office was in on an intentional election fraud conspiracy. Barr is investigating.

Politifact was quick to label the whistleblower’s claim false, saying that officially, the state isn’t allowed to accept them after election day. What they don’t want to discuss is what happens if they were accepted anyway? Even though they weren’t supposed to. Attorney General Barr wants to know and he’s going to find out. “federal investigators arrived in the state on Thursday.”

the United States Postal Service asked them to look into a Traverse City post office where “a USPS whistleblower in Michigan” claims to have witnessed “organized voter fraud.” They had a special bin for every ballot that came in the day after the election. Each ballot was hand stamped with the previous day’s date, November 3, which was election day. They were placed in “express” pouches and rushed to the voting centers. They weren’t legally supposed to be accepted but every indication is that they were. Probably illegally counted as well.

Supreme Court Justice Samuel Alito made an announcement during a speech before the Federalist Society on Thursday, stating…
byAnastasia Boushee 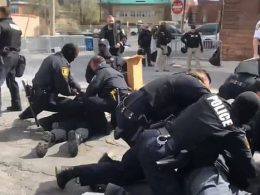 Thanks to the dedication of true blue police officers, law and order has been restored to the community…
byMark Megahan