Muriel Bowser, mayor of Washington D.C., is asking the Pentagon for help due to the migrant population in the city. This is the Mayor’s second request for help after the federal department rejected her pleas last week.

What was Bowser’s request? She just wants the DC National Guard to be deployed to “prevent a prolonged humanitarian crisis in our nation’s capital resulting from the daily arrival of migrants.”

In a  letter to Secretary of Defense Lloyd Austin, Bowser wrote, “We need help from our federal partners as we seek to stabilize and manage our operating environment in this crisis.”

The DC National Guard would manage facilities established to house the migrants, including overseeing “feeding and sanitation” as well as offering “ground support.”

Bowser said migrants that arrive in DC need support for at least 72 hours before, she claims, they move on to their “final destination.”

“As Mayor since 2015, I’ve requested DC National Gaurd support nearly fifty times – to support our COVID-19 response, major events, and severe weather. Each time, these operational, apolitical requests have been granted,” Bowser wrote. Obviously leaving out how horribly her administration, city, and the Democrats have treated the National Guardsmen at those times.

The mayor has asked for the DCNG to be deployed by Aug. 22, she requests a deployment period of 90 days.

It’s about time D.C. elites feel the pressure that most border states have been under since Democrat policies encourage the mass migration of illegal immigrants into the United States. Texas Governor Greg Abbott has had enough and in a rare show of leadership has been busing illegal immigrants to the city since April 13.

Both Bowser and New York City Mayor Eric Adams turned down an invitation from Abbott to tour the US-Mexico border.

Bowser claims that the migrants who are being sent to DC were “tricked” into traveling.

“We have for sure called on the federal government to work across state lines to prevent people from really being tricked into getting on buses,” Bowser said on CBS’ Face the Nation. “We think they’re largely asylum seekers who are going to final destinations that are not Washington, D.C.”

While it’s okay for the citizens of border states to pick up the cost of Democratic policies on immigration, with their tax dollars, the D.C. mayor says that local residents “should not pick up the tab” for the cost of social services offered to the illegal migrants.

“We really need a coordinated federal response,” she said. “We know that it’s done for refugees who come to the states from all points of the world and the same has to be done in the situation.”

Bowser’s request for assistance should highlight the hardship that the illegal immigration crisis has placed on border communities in Texas and other states, Abbott said in a statement.

“If the mayors of America’s most populous city and the nation’s capital are complaining about a few thousand migrants, imagine what these small border communities with more limited resources face on the frontlines,” the governor wrote in an opinion piece for Fox News.

“The New York City and D.C. mayors’ recent interest in this relentless crisis is a welcome departure from willful ignorance the Biden administration continues to demonstrate,” he added. “President Biden has never visited the border to understand the magnitude of the crisis he created.”

Bowser is currently running for reelection for her third term in office.
Source

Far-left Democratic Rep. and self-proclaimed socialist Alexandria Ocasio-Cortez (AOC) has now complained that her salary of $174,000 is…
bySandy Ravage

Starting on September 12, all six of the Class I freight rail carriers will begin taking steps to…
byMark Megahan 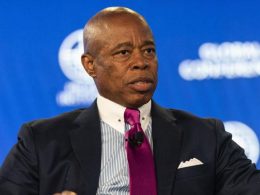