A 41-count criminal complaint has been announced against two Los Angeles men who allegedly submitted over 8,000 forged voter registration applications on behalf of homeless people over a four-month period.

“I think that this is an example of how the system is supposed to work, that if you see something and something is suspect, you report it and we investigate it,” Dean Logan, LA County’s top election official said.

“In this case, it was stopped before any harm to the election could happen,” Logan added.

According to a news release from the Los Angeles County District Attorney’s Office, the warrant against the two men for the forged applications was filed on November 12.

The charges for both men reportedly include one count of conspiracy to commit voter fraud, eight counts of voter fraud, four counts of procuring and offering a false forged instrument, and four misdemeanors for interfering with a prompt transfer of a completed affidavit.

Montenegro faces additional charges beyond those levied on his co-conspirator, facing up to 15 years and eight months in prison if convicted. Arvelo could receive up to 7 years for his crimes if convicted.

A new poll by Rasmussen has President Trump surging into a lead over Joe Biden. The same poll…
byAnastasia Boushee 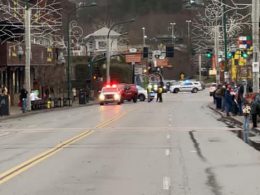