A suspect is in custody and police are still investigating a possible motive after an assassination attempt on a politician in his office in Louisville, Kentucky.

Craig Greenburg, a Democrat candidate running for mayor in Louisville, Kentucky, is uninjured after an assassination attempt in his office on the morning of Monday, February 14th.

According to Louisville Police Chief Erika Shields, no one was injured during the shooting, though one round did graze Greenburg’s clothing.

Shields declined to speculate about the motive behind the attack, but did note that Greenberg appeared to have been “targeted.”

Greenberg addressed the assassination attempt in a press release on Monday afternoon, revealing that the shooter had opened fire almost immediately after walking into his campaign office. One of Greenberg’s staffers was able to force the door closed, and the team was then able to barricade the door shut. The shooter then fled the scene.

“This morning, I was gathered for a brief meeting with four of my incredible team members in our campaign office,” Greenberg stated. “A man walked into our office. When we greeted him, he pulled out a gun, aimed directly at me and began shooting.”

“Let me say again that all of us are blessed to be with you,” he continued. “Despite one bullet coming so close that it grazed my sweater, no one was physically harmed, and we are extraordinarily grateful for our safety. We are shaken, but safe.”

My team and I are fortunately all safe. We are all with LMPD now. I will provide an update as soon as possible. Thank you for the outpouring of support.

Greenberg’s campaign office is on the fourth floor of Butchertown Market, a business and shopping center near downtown Louisville.

In a statement to local news outlet WLKY, Metro Council President David James confirmed Greenberg’s account of the events of that day, stating that a person walked into the campaign office and fired multiple shots at Greenberg just after 10 a.m., while also describing it as an assassination attempt.

“Craig Greenburg was shot at this morning in an attempted assassination,” James said.

According to Louisville Metro Council President David James: "Craig Greenburg was shot at this morning in an attempted assassination." @RunWithCraig

Greenberg is one of the front-runners in the primary, which means that he could be the overwhelming favorite to be the next mayor of Louisville should he win the Democrat Party’s nomination.

Louisville Democrat activist Quintez Brown has been arrested and charged with attempted murder and four counts of wanton endangerment in connection with the attempted assassination of Greenberg, according to officials.

The 21 year old activist has connections to high profile Democrats within the state, and across the country. Brown was even interviewed by radical leftist MSNBC host Joy Reid in the recent past.

Here is @JoyAnnReid interviewing the shooting suspect/BLM activist/black nationalist accused of trying to assassinate a Louisville mayoral candidate in a shooting. Quintez Brown was an anti-gun advocate in the March for Our Lives protest. pic.twitter.com/1yPM4qr1ek

He was also a speaker and advocate for Democrat candidates in Kentucky in the past.

This year’s midterm election is the perfect opportunity to regain conservative control of Congress. Deep State division could…
byMark Megahan

Texas vs. Georgia, Wisconsin, Michigan, Pennsylvania The Legal Battle-lines are drawn in the most pivotal Supreme Court case…
bySandy Ravage 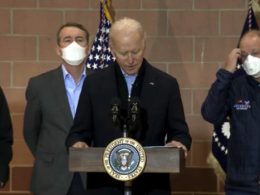 Arizona state Senator Sonny Borrelli has dropped a bombshell announcement about the state’s election audit. In an interview…
bySandy Ravage

An anarchist infiltrated the virtual City Council meeting in Portland, Oregon on Wednesday, February 2, by disguising himself…
byMark Megahan 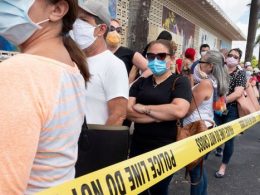