Over twelve hours before the official release of the Arizona State Senate’s Forensic Audit of the 2020 Election, the leftist mainstream media, no doubt fed the information attempted to short-circuit the SEISMIC impact of the audit by corruptly and falsely reporting “Arizona GOP’s Election Audit Confirms Biden Win in State” and “Election audit hand count shows Biden won Maricopa County, no evidence of voter fraud“. The mainstream reports couldn’t possibly be further from the truth. The one kernel of truth in the leftists’ body of reportage is that the recount did indeed show more votes for Joe Biden, unmistakably in fact. But there is a bit of a problem with that analysis from our countrymen on the left: You’re only supposed to count the LEGAL BALLOTS. The left is seriously afraid of the AZAuditResults and it shows.

The ACTUAL Report on the AZAuditResults 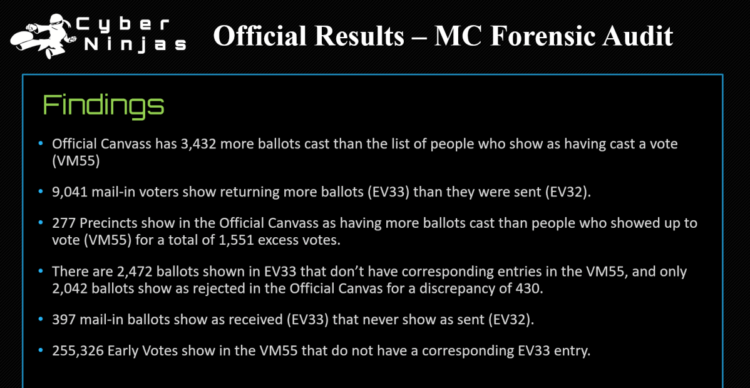 In all actuality numbers revealed by the CyberNinja, CyFIR and EchoMail tell a far different story, and it’s one that is truly damning to the Maricopa County Board of Supervisors. Incompetence is insufficient to explain these discrepancies. Here are the highlights of Critical, High, and Medium impact categories:

The CyFir Forensic analysis of the voting systems showed voting computers were capable of being accessed by the Internet and remote access was enabled and “significant internet history recovered from unallocated space” in addition to multiple FUNDAMENTAL FAILURES in the most BASIC IT security measures.

#AZAuditResults "Some individual went into an application and they chose specifically to run something that would clear all records in the system that was used to generate the official results the day before an audit started." #AZAudit #AuditAll50States pic.twitter.com/zp9Vb8vDiv

In total: 57,734 ballots have been marked by the Audit as being suspect. According to the Arizona Secretary of State Katie Hobbs: Joe Biden won the 2020 Election by a margin of 10,457 votes.

“The left keeps reporting that the AZ audit confirms Biden’s win. But that is literally the opposite of what the report says. Biden won the state by around 10,500 votes, and there were over 57,000 problematic ballots uncovered…”

Now That The Results Are In, It’s Time For Action

Arizona Senator Wendy Rogers announced shortly after the hearing at the State Capital that she and other State legislators are issuing “A New Declaration Of Independence” calling for “Forensic Audits in all Fifty states” and the immediate decertification of Arizona’s electoral college vote as well as a convening of the US House of Representatives to conduct a contingency vote in place of the invalid electoral college certification. State Senator Sonny Borelli described that “we’ve lit the Prairie on fire” suggesting that fire will spread to Wisconsin, Pennsylvania, Georgia, and beyond.

41 Legislators from Multiple States Write a Letter to the American People Calling for a 50-State Audit, Decertification Where Appropriate, and Possible Convening of the US House of Representatives pic.twitter.com/Hoz6zUBtZq

As Rogers and her colleagues closed their letter,

“This is a historic obligation to restore the election integrity of the vote as the bedrock of our constitutional republic.