The husband of Democrat House Speaker Nancy Pelosi suddenly purchased $2.2 million in Tesla stock in March — an investment that comes as a growing number of lawmakers are discussing a total ban on stock trading for Congressmembers and their spouses.

The revelation could further anger critics from both parties, who argue that such deals pose a serious conflict of interest because Nancy Pelosi and other members of Congress have access to sensitive information and are responsible for enacting laws regulating the very companies that they are buying stock in.

Back in January of 2022, the New York Post reported that Pelosi was trying to quash the bill:

Nancy Pelosi is scrambling to quash bipartisan efforts to ban stock trading by Congressional lawmakers — even as she and her husband have raked in as much as $30 million from bets on the Big Tech firms Pelosi is responsible for regulating.

Late last month, the House Speaker disclosed that the Pelosis scooped up millions in bullish call options for stocks including Google, Salesforce, Micron Technology and Roblox. At the same, some insiders say she has slow-walked efforts to rein in Big Tech.

Days later, Pelosi brushed off worries over stock picking by lawmakers, claiming it was part of the “free-market economy” — comments that made Democratic insiders “blood boil,” people close to the speaker told The Post.

According to the disclosure, Paul Pelosi, who owns and runs a San Francisco-based venture capital firm, purchased 2,500 shares of the Tesla’s stock by exercising 25 call options at a strike price of $500 per share on March 17th. The options were set to expire the next day.

“Pelosi’s financial disclosure indicates that her husband purchased 2,500 shares of Tesla stock on March 17 — then worth nearly $2.2 million — by exercising call options at a strike price of $500 per share. The options were set to expire the next day, according to the disclosure. Tesla stock traded near $1,000 per share on March 23.”

“Tesla, which manufactures electric vehicles and solar panels, spends hundreds of thousands of dollars each year to lobby the federal government, according to lobbying disclosures compiled by nonpartisan research organization OpenSecrets. Tesla’s CEO is Elon Musk, the wealthiest person on Earth, according to the Bloomberg Billionaire Index.”

Back in January, Senator Josh Hawley (R-MO) announced that he was introducing the Banning Insider Trading in Congress Act. The bill would prohibit members of Congress and their spouses from holding or trading individual stocks. Any members found to be in violation of the bill would be forced to return their profits.

The Banning Insider Trading in Congress Act would:

“Year after year, politicians somehow manage to outperform the market, buying and selling millions in stocks of companies they’re supposed to be regulating,” Senator Hawley said. “Wall Street and Big Tech work hand-in-hand with elected officials to enrich each other at the expense of the country. Here’s something we can do: ban all members of Congress from trading stocks and force those who do to pay their proceeds back to the American people. It’s time to stop turning a blind eye to Washington profiteering.”

Speaker Pelosi initially rejected the idea of ​​banning stock trading in Congress, attempting to argue in December that lawmakers should be allowed to participate in a “free market economy.”

After receiving significant backlash from her comments, Pelosi reversed course and claimed that she would be open to stricter stock trading rules — including a possible ban.

Rapper and singer Kid Rock released an anti-Joe Biden song, and has taken to social media to deliver…
byStaff Editor 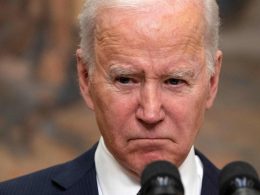 There is a second reported fatal case of the monkeypox virus in the United States. The Los Angeles…
bySandy Ravage

U.S. consumer prices surged in February, leading to the largest annual increase in 40 years, and inflation is…
bySandy Ravage