In a move that could reflect the future of American media under the Biden/Harris regime, China has taken the BBC World News Off air in Chinese Territory, permanently. According to Beijing’s National radio and Television Administration the BBC was pulled due to “serious content violation” according to Chinese Communist Party propaganda arm Xinhua News.

The BBC World News reports violated “requirements that news reporting must be true and impartial” and also “undermined China’s national interests and ethnic solidarity,” according to the outlet. “As the channel fails to meet the requirements to broadcast in China as an overseas channel, BBC World News is not allowed to continue its service within Chinese territory,” the regulator said in a statement. “The NRTA will not accept the channel’s broadcast application for the new year.”

Punished for Reporting on the Uighur Genocide and COVID19

The BBC has recently released powerful reporting on the Uighur Muslim concentration camp/detention centers aka “reeducation” centers in the Xinjiang region. The BBC reported “‘Their goal is to destroy everyone’: Uighur camp detainees allege systematic rape”

“Human rights groups say the Chinese government has gradually stripped away the religious and other freedoms of the Uighurs, culminating in an oppressive system of mass surveillance, detention, indoctrination, and even forced sterilisation.”

“Tursunay Ziawudun, who fled Xinjiang after her release and is now in the US, said women were removed from the cells “every night” and raped by one or more masked Chinese men. She said she was tortured and later gang-raped on three occasions, each time by two or three men.”

The BBC also drew the ire of Xi Jinping’s regime reporting an unfiltered timeline of the first 5 days of the COVID19 outbreak in Wuhan. Specifically the report noted the silenced doctors, “On 2 January, China Central Television ran a story about the doctors who spread the news about an outbreak four days earlier. The doctors, referred to only as “rumour mongers” and “internet users”, were brought in for questioning by the Wuhan Public Security Bureau and ‘dealt with’ ‘in accordance with the law’.”

One of the doctors was Li Wenliang, the eye doctor whose warning had gone viral. He signed a confession. In February, the doctor died of Covid-19.(pictured)

A Clear Act of Retaliation from China

This came only one week after the UK’s media regulatory body Ofcom, determined that the Chinese State television broadcast CCTV’s English language service “CGTN” is in fact controlled by the Chinese Communist Party and cancelled their license due to violations in the licensure agreement. Authorities in London and the reporters and editorial staff didn’t bend the knee to Beijing and should be lauded for their refusal to cave. One could only hope that officials in Washington and media in office across America look down in shame at their own comparative cowardice. The BBC typically writes as many mainstream media outlets do from a leftist perspective, but on some things we can find common ground. This is one of them.

BREAKING: BBC has been banned in China. The report said the BBC was responsible for a 'slew of falsified reporting' on issues including Xinjiang and China's handling of coronavirus. It went on to say that 'fake news' is not tolerated in China

The BBC responded in a statement to Variety,

“We are disappointed that the Chinese authorities have decided to take this course of action. The BBC is the world’s most trusted international news broadcaster and reports on stories from around the world fairly, impartially and without fear or favour.” 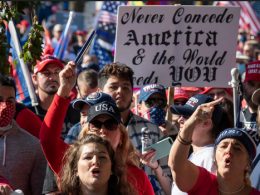