This RINO managed a similar percentage of the vote in Louisiana to the President, 59 percent to Trump’s 58 percent, he was on the ballot right beneath him. But that’s where the similarities end. As Senator Bill Cassidy betrays his state over and over again, it becomes clear: the Bayou state isn’t having it.  Cassidy aligned himself with the likes of Senators Chuck Schumer and Mazie Hirono to validate the attempted railroading of President Trump in a second farcical impeachment and voting in favor of it. Now he’s paying for it.

“There are billboards all over Louisiana with Cassidy’s image and “OBJECT OF SHAME” in large letters, a reference to the characterization of Cassidy by the East Baton Rouge Parish Republican Party after his vote in favor of the impeachment trial’s constitutionality. His staff had all but given up answering the phone by the second week of February, so brutal and voluminous were the calls expressing outrage at his impeachment votes. The state GOP censured him with a savage statement following his vote to convict Trump.”

Cassidy v. Trump Isn’t Much of a Fight by Scott McKay @TheHayridehttps://t.co/Jhv4OC6xEi

Since the Capitol breach Sen. Bill Cassidy has launched a crusade against President Trump and the MAGA movement that re-elected him.

“During an appearance Sunday on CNN’s State of the Union, Cassidy warned his party that if it does not shift its focus to the issues, GOP candidates will lose in upcoming elections. “Political campaigns are about winning,” Cassidy said. “Our agenda does not move forward unless we win. We need a candidate who can not only win himself or herself, but we also have to have someone who lifts all boats. And that’s clearly not happened over the last four years.”

“Cassidy — one of seven Republican senators who voted to convict Trump of inciting the Jan. 6 insurrection at the Capitol — does not think Trump will be the 2024 GOP presidential nominee. He said Republicans need to connect with voters on “those issues that are important to the American people” if they want to win the 2022 midterms and 2024 presidential election, not worry about “putting one person on a pedestal and making that one person our focal point. If we idolize one person, we will lose. And that’s kind of clear from the last election.”

“There are three problems with Cassidy’s statements. First, Cassidy’s accusation that CPAC’s attendees and the rest of the MAGA voters out there are idolaters engaged in making a cult of personality from Trump is thoroughly off-base. Trump’s supporters aren’t under the illusion he’s some sort of messiah or that he’s flawless. Far from it — they’ve stipulated to Trump’s flaws from the get-go.”

Let’s Cut Through The BS

The internet is rife with accusations that Cassidy is following the lead of … Mrs. Cassidy but that is besides the point with all due respect to Jim Hoft of Gateway Pundit. The point is: Cassidy gladly rode President Trump’s wake to re-election like so many other good ol’ boys (we’re looking at you Mitch McConnell) and has found himself in the sights of his own state party as the old guard betrays Trump.

Louisianians are extremely angry and embarrassed by their own GOP Senator. Ignoring their will completely, Cassidy flipped on a President who carried from the Bayou to the Delta, Cajun Country, the Creole parishes and New Orleans handily and still polls EXTREMELY well within the grassroots. Shreveport and Baton Rouge do NOT overrule the rest of the state, this isn’t Illinois or New York we’re talking about here. When a politician betrays the people of Louisiana they don’t tend to fare well long term, just ask Sen. Huey Long. 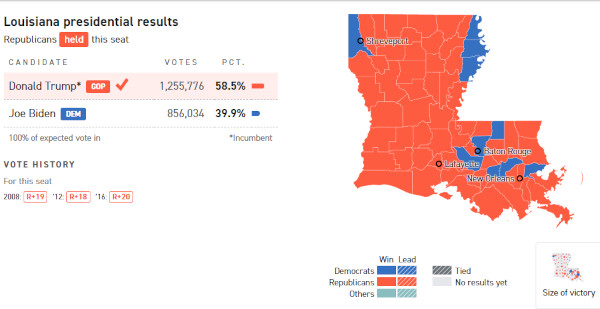 Simply put, Senator Cassidy has demonstrated that he is a rank opportunist with no real loyalty to his party or his constituents. He’s decided to back the good ol’ boy establishment, which before 2016 was a sure-fire way to succeed in the Deep South GOP. Only now, this isn’t his daddy’s Republican party anymore.

McKay summed it up nicely,

“Cassidy won reelection, by the way, by gleefully riding Trump’s coattails. The Democrats put up a thoroughly hapless candidate, Shreveport’s disaster of a mayor Adrian Perkins, and Cassidy hadn’t yet done anything to attract a conservative challenger. He’ll certainly have one in 2026 if he runs for reelection then.

And if he does, he can be sure such a challenger will be a “CPAC” Republican. That’s likely to present Cassidy with an educational moment, because one of the other things he said, which showed him to be utterly out of touch with reality was that CPAC isn’t the Republican Party.”
As the last decade has shown: CPAC and Donald Trump are more the Republican Party than the RNC ever was. Maybe its time Matt Schlapp took over for Ronna McDaniel.