Pro-life backing Governor Kim Reynolds signed a law on June 29, 2020, which provides women with time to contemplate information regarding their unborn babies before they finalized having an abortion.

Iowa Gov. Reynolds gave kudos to the state lawmakers who passed House File 594, which mandates that women seeking abortions must wait 24 hours before the procedure can be executed, Life News reports.

“I am proud to stand up for the sanctity of every human life,” she said in a statement. “Life is precious, life is sacred, and we can never stop fighting for it. I applaud the Iowa lawmakers who had the courage to stand strong and take action to protect the unborn child.”

The newly enacted legislation requires that abortion facilities show women their babies via ultrasound and have them listen to the baby’s heartbeat at least 24 hours before the scheduled abortion.

Additionally, the state now makes abortion facilities give women information regarding abortion risks as well as resources for parenting and adoption options. It then has to be confirmed in writing that the women received the necessary items and resources.

The law was supposed to go into effect on July 1, 2020, but an Iowa judge blocked it. Last week Planned Parenthood sued Reynolds and the judge is now halting the legislation until the lawsuit is resolved, according to the Iowa State Daily.

The American Civil Liberties Union is also joining forces with Planned Parenthood to stop this law from going into effect.

However, despite this setback, pro-lifers continue to celebrate the potential justice for the unborn.

“College Republicans is glad to hear Gov. Reynolds signed this pro-life legislation. Abortion hurts women and families, and that 24 hours can and will save lives,” the President of Iowa State College Republicans Ryan Hurley said.

The Iowa law was signed the same day the U.S. Supreme Court rejected a Louisiana abortion law that required doctors to have admitting privileges from local hospitals to carry out abortions.

“On the same day that the U.S. Supreme Court overturned a Louisiana law that required abortion providers to have hospital admitting privileges, Governor Reynolds signed the mandatory 24-hour waiting period into law,” Karen Kedrowski, director of the Carrie Chapman Catt Center said. “This is less restrictive than the 72 hour waiting period that was overturned recently. Iowa is part of a national effort to force court challenges to abortion restrictions in the hopes that the U.S. Supreme Court will overturn Roe vs. Wade. Abortion opponents believe that they have a five-vote majority on the Court, which includes Chief Justice Roberts. However, today’s Supreme Court decision implies that Roberts respects precedent and is not the reliable anti-abortion vote that many hoped he would be.”

As abortion continues to be one of the most controversial topics of present American society, justice for the unborn is still a top priority for most conservatives.

With President Trump being an adamant pro-life leader, his supporters celebrate other politicians like Gov. Reynolds, who uphold pro-life principles. 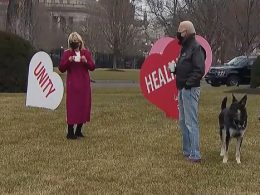