Newly released details regarding a kidnapping plot have law enforcement and their families on high alert. Federal investigators say that the group of extremists accused of planning to kidnap Democrat Michigan Governor Gretchen Whitmer also allegedly plotted to “target and kill police” in order to instigate a “civil war.”

The months-long investigation into the threat was closed by the Federal Bureau of Investigation earlier this month, when FBI agents arrested 13 suspects who had reportedly been planning these attacks.

Michigan State Police First Lieutenant Mike Shaw told the Detroit Free Press that local departments have upped their security measures since this information had been discovered.

According to investigators, members of the group called on their followers to find home addresses for police officers and other members of law enforcement. Their plan was to target the officers while also planning the details of their violent attack on Michigan’s state capitol.

“The militia group had already been brought to the attention of the FBI by a local police department in March 2020 when members of the militia group were attempting to obtain the addresses of local law enforcement officers.

At the time, the FBI interviewed a member of the militia group who was concerned about the group’s plan to target and kill police officers and that person agreed to become a CHS (confidential human source).”

Law enforcement has recently become a target from extremists on both ends of the political spectrum: from Black Lives Matter and ANTIFA terrorists, to radical “far-right” terrorists.

“The threat is always there, but this raises it to another level of alarm when you start to target the officers when they’re not in their uniform, not on duty, not working. Now they’re tracking you,” Stevenson told The Police Tribune.

Stevenson also said that he views all extremist groups as dangerous, regardless of their beliefs. “We’re not under the illusion that because someone’s politics are left or right that they’re not dangerous,” he said.

According to multiple sources, at least two of the thirteen individuals being charged have prior military training. One suspect, Joseph Morrison, has served in the Marine Corps Reserve since 2015. Another suspect, Daniel Harris, was a Marine Corps rifleman from 2014 until 2019.

The Washington Post reported that Harris attended a Black Lives Mater protest back in June, prior to his arrest, though they offered no details about his reasons for attending the protest.

According to Law Enforcement Today, “The FBI has said it opened an investigation into the group earlier this year after social media discussions about the violent overthrow of law enforcement and state governments drew the attention of agents.”

The FBI’s report said: “The group talked about creating a society that followed the U.S. Bill of Rights and where they could be self-sufficient. They discussed different ways of achieving this goal from peaceful endeavors to violent actions.”

Busty Well Endowed Lawmaker Catches Heat Over Her Outfit Choices...Can You See Why

The Supreme Court has once again betrayed the American people. Instead of actually taking up a case and…
bySandy Ravage 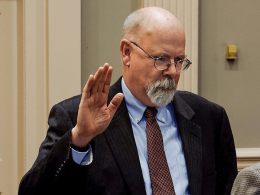