During her trip, Tulsi Gabbard met with Syrian President Bashar al-Assad, a brutal dictator known for cracking down on freedom and torturing political opponents.

“Initially I hadn’t planned on meeting him,” she said about Assad. “Whatever you think about President Assad, the fact is that he is the president of Syria. In order for any possibility of a viable peace agreement to occur, there has to be a conversation with him.”

“I’ll tell you what I heard from the Syrian people,” she said. “As they were walking down the streets in Aleppo, in Damascus… they expressed happiness and joy at seeing an American walking through their streets. But they expressed a question. They said: ‘Why is it that the United States, its allies and other countries, are providing support, are providing arms, to terrorist groups, like al-Nusra, al-Qeeda, ISIS, who are on the ground there, raping, kidnapping, torturing and killing the Syrian people?’ Children, men, women, people of all ages.”

“I didn’t have an answer for them,” she added.

Responding to Gabbard’s statement, Jake Tapper tried desperately to cover for his pal Obama, stating: “Obviously, the United States Government denies providing any help to the terrorist groups you’re talking about. They say they provide help for the rebel groups.”

Gabbard replied by pointing out that no one actually knows who the so-called “rebel groups” that the Obama White House was supporting were.

“Every place that I went, every person that I spoke to, I asked this question to them, and without hesitation, they said there are no moderate rebels. Who are these moderate rebels that people keep speaking of?” she asked.

“The Syrian people recognize, and they know, that if President Assad is overthrown, a group like ISIS or al-Qaeda… will take charge of all of Syria,” Gabbard concluded. 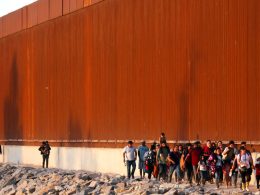 At least she admitted it. Damara Holness saved the town of Fort Lauderdale, Florida the expense of a…
byMark Megahan

In exchange for $10,000, would you give up your seat on a flight? Well this was the exact…
bySandy Ravage

Chair of the Congressional GOP Conference Rep. Elise Stefanik (R-NY) has come out swinging with a dire warning…
bySandy Ravage