Lt. Col. Stuart Scheller, a Marine who was fired for speaking out against the lack of accountability among military leadership, has released another shocking video.

Despite previously stating that he would not be making further statements until he exits the Marine Corps, Scheller has decided that speaking out about the failures of military leadership is more important than his career and staying silent.

Why He Was Fired

In his first viral video, Lt. Col. Stuart Scheller called out military leadership for not taking responsibility for their actions related to the disastrous withdrawal from Afghanistan and the resulting deaths of American soldiers.

“People are upset because senior leaders let them down, and none of them are raising their hands and accepting accountability or saying ‘we messed this up,’” he said.

“Did any of you throw your rank on the table and say ‘hey, it’s a bad idea to evacuate Bagram Airfield, a strategic airbase, before we evacuate everyone.’ Did anyone do that? And when you didn’t think to do that did anyone raise their hand and say ‘we completely messed this up?’ Potentially all those people did die in vain if we don’t have senior leaders that own up and raise their hand and say ‘we did not do this well in the end,’” Scheller continued.

Even though he knew that there might be consequences to his statements, Scheller feels that this was something that needed to be said.

“I wanna say this very strongly. I have been fighting for 17 years. I am willing to throw it all away to say to my senior leaders: I demand accountability,” the Marine concluded.

Marine officer Stuart Scheller has been relieved from duty for this video.

Soon after the video went viral, Lt. Col. Scheller announced to the public that he had been relieved of his command. In a statement about his firing, he said that he understood and respected the decision.

“To all my friends across the social networks. I have been relieved for cause based on a lack of trust and confidence as of 14:30 today,” Scheller wrote in a post on Facebook.

“My chain of command is doing exactly what I would do … if I were in their shoes,” the Marine added. “I appreciate the opportunities AITB command provided. To all the news agencies asking for interviews … I will not be making any statements other than what’s on my social platforms until I exit the Marine Corps.”

In a new video, Scheller confirmed that he had lost his position, but added that he is still an active-duty Marine.

Scheller admitted that he could still have a future in the military, but he had decided that he was ready to give all of that up to keep fighting back against the lack of accountability from senior military leaders.

“I’ve come to a place where I feel at peace with making some further statements, and that’s the purpose of this video,” Scheller said.

“Currently I am not pending legal action,” the Marine added. “I think the plan was to hide me away for three years, let an investigation take place but not send me to a board of inquiry where they would have separated me on other-than-honorable conditions. So I had the choice where I could remain silent, keep my retirement for three years and quite honestly live the dream for not many responsibilities.”

Scheller then went on to explain his reasons for calling out senior military officials in such a public manner. According to the Marine, one of his superiors — Col. Thomas K. Hobbs — had been relieved of his command in the past for bringing up complaints within the discretion of the military chain of command.

“[Hobbs] was just shuffled out the door without really affecting any change,” Scheller said, noting that Hobbs had commented on the original video that cost him his position.

Hobbs’ comment read: “If Scheller was truly honorable, he would have resigned his commission in protest after stating what he did.”

Following Hobbs’ advice, Scheller announced that he would be resigning his officer’s commission, which means he would be giving away his full military retirement.

“I want to make the announcement today, after 17 years, I’m currently not pending legal action, and I could stay in the Marine Corps for another three years. But I don’t think that’s the path I’m on. I’m resigning my commission as a United States Marine, effective now… I am forfeiting my retirement, my entitlements, I don’t want a single dollar, I don’t want any money from the VA, I don’t want any VA benefits. I’m sure I’m entitled to a hundred percent. I breathed in the smell and smoke of burning sh*t for years. I don’t want any of it,” he said.

“All I asked for was accountability of my senior leaders when there are clear, obvious mistakes that were made… had they done that, I would have gone back into rank and file, submitted, and accomplished what I wanted,” Scheller added.

“The morning after I posted my video and I came into work, my boss came in and he asked me ‘what were you trying to accomplish?’ And that was a very tough question for me and my response was ‘I want my senior leaders to accept accountability.’ I think them accepting accountability would do more for service members and [post traumatic stress disorder] and struggling with purpose than any other transparent piece of paper or message. And I haven’t received that,” the Marine continued.

Next, Scheller made another shocking announcement, saying that the potentially two million dollars and equivalent costs from VA benefits that he would be entitled to with a full military retirement should be reallocated to pay senior military leaders “because I think they need it more than I do, because when I’m done with what I’m about to do, you all are going to need the jobs and the security.”

“To all the congressmen, senators, every media station across the globe, to all the rich philanthropists, I appreciate the support and I’m going to need your support… I don’t need a single dollar. I just need every single person that’s willing to go back outside the wire every single day, to wear a blue collar and to go into work every single day and feed their families, those are the people that I need,” he continued.

“Follow me and we will bring the whole f*cking system down,” Scheller added. 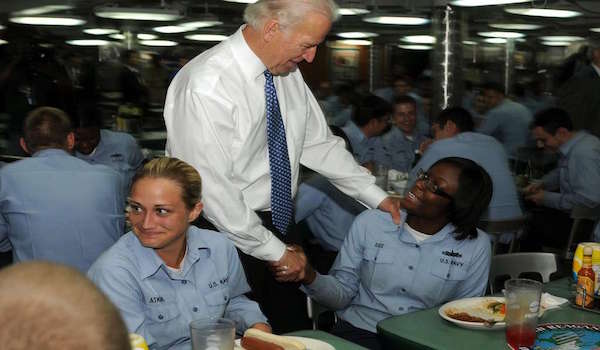 President Donald Trump was just declared the winner in a key battleground state, which will provide him with…
byAnastasia Boushee