The Bulletin of the Atomic Scientists refuse to move the time on the infamous “Doomsday Clock” closer to midnight despite war in Europe involving a nuclear power, which raises questions about the practices and biases of an institution that mainstream media outlets refer to as scientific.

The Washington Free Beacon has exclusive reporting on the issue, writing:

When asked by the Washington Free Beacon whether the clock would move forward after citing criteria the organization used in the past, such as armed conflict involving countries with nuclear weapons, a spokesman referred to a March 7 statement from the group saying the time would remain unchanged. Subsequent questions about the organization’s methodology went unanswered.

The decision not to change the clock comes after Russian president Vladimir Putin put his nuclear arsenal on “high alert,” and NATO mobilized its response force for the first time since its inception. In contrast, the clock moved three times toward midnight under former president Donald Trump, with the organization citing his failure to address, in addition to nuclear weapons, climate change and “fake news.”

The “Doomsday Clock” was created in the aftermath of World War II, and it remains a fixation for many journalists in the mainstream media over its supposed prediction of when humanity will end.

Both the New York Times and the Washington Post track all of the clock’s movements and put their coverage of it in their science sections, despite the clock not having any relation to the scientific method whatsoever.

The director of the organization, Rachel Bronson, is not a scientist and has no scientific background, though the original founders of the Bulletin of the Atomic Scientists included Albert Einstein and other scientists who worked on the Manhattan Project. Bronson previously taught at Northwestern University’s business school as an adjunct professor.

The most recent time change for the “Doomsday Clock” occurred in January of 2020, one year before Joe Biden took office. That time change marked the official time at 100 seconds to midnight — which was the latest time in the history of the clock. It has stayed at that spot for the last three years.

In a statement released at that time, the Bulletin of the Atomic Scientists claimed that the reasons behind their beliefs that humanity is closer to extinction than at any time in history were the ending of the Iran nuclear deal, the “continued corruption of the information ecosphere on which democracy and public decision making depend,” and Donald Trump’s decision to withdraw the United States from the Paris climate change agreement, among other issues.

For comparison, during the Cuban Missile Crisis in 1962, when the United States and Soviet Union nearly engaged in a nuclear war, the Doomsday Clock stood at seven minutes to midnight. The last time the clock turned back was under former president Barack Obama in 2010, with the group celebrating his work on lowering carbon emissions.

Outlets such as the Washington Post have not questioned the group’s movements of the clock. A 2017 article from the outlet was titled “The Doomsday Clock just advanced, ‘thanks to Trump’: It’s now just 2 ½ minutes to ‘midnight,'” despite no one in the story being quoted as saying “thanks to Trump.” Another story from the Associated Press titled “Scientists move Doomsday Clock 30 seconds to midnight” featured an image of Thomas Pickering, who is not a scientist and serves on the board of the Iranian lobbying group National Iranian American Council, at the announcement.

Clearly, looking at the Bulletin of the Atomic Scientists’ past decisions under former President Trump, and their current decision not to move the clock under Biden despite the ongoing conflict with Russia (a nuclear power!), they are anything but “scientific.” The “Bulletin of the Atomic Scientists” is just another left-wing political organization masquerading as a neutral group. 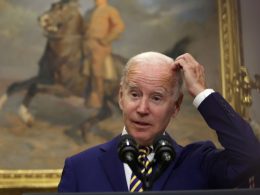 While some may view the recent U.S. airstrikes in Syria against an Iranian-aligned target as a positive turning…
bySandy Ravage