Democrats have been consistently lying about their role in skyrocketing gas prices. Despite the Biden administration reassuring the American people that it is doing nothing to discourage oil companies from opening new drilling sites, Joe Biden’s allies in Congress were pressuring oil executives just a few months ago to decrease outputs because of climate change, raising questions about the Democrats’ strategy to lower prices for average Americans.

In late October of 2021, for example, the House Oversight and Reform Committee called in the CEOs of Exxon, BP, Shell, and Chevron to explain what steps they have been taking to produce less oil and gas. During that hearing, Rep. Hank Johnson (D-GA) claimed that “the world can’t wait” any longer. At the time, gas prices were hovering at around a 10-year high.

The hearing has gained new relevance as a global gas shortage has pushed prices to an all-time high. Prices are rising even more due to Russia’s invasion of Ukraine, with no sign of falling after Biden’s announcement that the United States will no longer accept Russian oil imports. Those facts have left Democrats scrambling for a solution before the November midterms as Republicans demand that the White House encourage domestic oil drilling operations.

Joe Biden claimed on Tuesday, March 8th that his administration’s policies are not “holding back domestic energy production,” echoing comments from White House Press Secretary Jen Psaki, who claimed that “federal policies are not limiting the supplies of oil and gas” before mentioning the thousands of unused pre-approved oil and gas drilling leases. Of course, they are both lying, and it’s obvious. From the moment Biden took office, gas prices began rising dramatically.

“You can draw a direct line from how the Democrats marauded energy production yesterday to the unprecedented pain Americans are feeling at the pump today,” said CounterPoint Strategies president Jim McCarthy, a policy adviser for leading energy companies.

Some of the more radical left-wing members of Congress, such as Rep. Ro Khanna (D-CA), have demanded that domestic oil companies drastically cut their domestic operations. At the same time, Khanna has called for the U.S. to end its dependency on oil imports from countries such as Russia, without proposing suitable alternatives.

In one conversation during the October 2021 hearing, Rep. Khanna pressed Shell president Gretchen Watkins on whether she agreed that “under the Paris agreement that … we need to have oil and gas production declining every year.”

After Watkins responded that the company believes “that hydrocarbon demand needs to reduce if we’re going to get to net zero [emissions] by 2050,” Khanna demanded to know whether Shell would decrease its production by 2 percent each year, a figure initially presented by the company in 2019.

“This is what happens when left-wing Democrat fantasies meet reality. Khanna and other Democrats spent most of the fall trying to strangle the life out of oil and gas companies and are now feigning surprise and evading responsibility at the outcome,” said CounterPoint Strategies president Jim McCarthy.

Rep. Khanna also demanded to know whether Chevron CEO Michael Wirth was embarrassed that his company has increased production while “the European counterparts are going down.”

When Wirth replied that global demand has increased, Rep. Khanna asked him for a commitment to help “bring the actual demand of oil production down.”

“In light of the invasion of Ukraine, Rep. Khanna called on President Biden to release oil from the Strategic Petroleum Reserve to bring down the price of gas and supports oil companies increasing production at existing facilities in the short term,” a Khanna spokeswoman told the Washington Free Beacon. “In the long term, he believes we need a moonshot to develop renewable energy sources to prevent similar situations from happening in the future and have a more diversified energy source.”

According to the Washington Free Beacon:

The average price for gasoline at the end of Biden’s first week of office was $2.39 a gallon. Prices have now hit above $4. Although defenders of the president say the rising prices are forces outside the administration’s control, as well as Russian president Vladimir Putin’s invasion of Ukraine, Republicans say Biden’s decision to cancel the Keystone XL pipeline and institute a moratorium on new gas leases is responsible.

Democrats scheduled a followup hearing with oil executives for Tuesday, March 8. That hearing was subsequently canceled last-minute, with no explanation given.

Former President Donald Trump has been slow to weigh in on some Republican primary races, but the who…
byStaff Editor

Russ Vought, the Former Director of the White House Office of Management and Budget under President Trump has…
bySandy Ravage 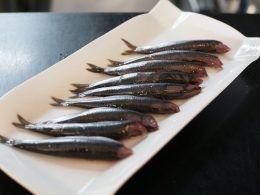 Why Is It Raining Anchovies In San Francisco…?

Recently, anchovies have been falling from the sky in San Francisco, which was an incredibly rare and unbelievable…
bySandy Ravage