Pete Buttigieg has flipped for Biden. Despite the fact that creepy Joe “supported the worst foreign policy decision made by the United States” in his lifetime, “which was the decision to invade Iraq,” Kamala has every right to pack the court with liberals. He even defends calling the SCOTUS appointment of Amy Coney Barrett “unconstitutional.” His “apology” highlights that, to liberals, the constitution means what they think it means, not what it says.

Buttigieg rolls over so Biden can get on top

The former mayor of South Bend, Indiana, made it clear during his campaign run that it was time for the old White guys and their outdated ideas to be replaced by radically progressive and revolutionary new ways of doing things. Since Biden iced him out in the primary, Pete Buttigieg is trying to firmly establish his career in politics at the national level by showing how much of a Deep State team player he is. even though he personally disagrees with just about everything Joe Biden stood for until now. Now, he’s part of the Biden transition team.

The mainstream Democrat voters disagreed and backed the old White guy who wasn’t a rabid socialist. Buttigieg is terrified that President Donald Trump’s appointment of Amy Coney Barrett to the Supreme Court will lead to the abolishment of gay marriage so he’s defending Biden’s false accusation that it’s unconstitutional. Neither of them have actually read the Constitution. Even if it’s not, he argues, there’s no reason whatsoever not to have 15 members on the supreme court with all 6 of the new ones named by the friends of George Soros.

Last year, Buttigieg floated the concept of a 15-member Supreme Court. On Sunday, he sat down with Chris Wallace to prove that Fox isn’t fair or balanced anymore. Wallace was thrilled to hear that that’s one thing Pete’s views haven’t changed on. “I think bipartisan reform with the purpose of reducing the politicization of the court is a really promising idea.” 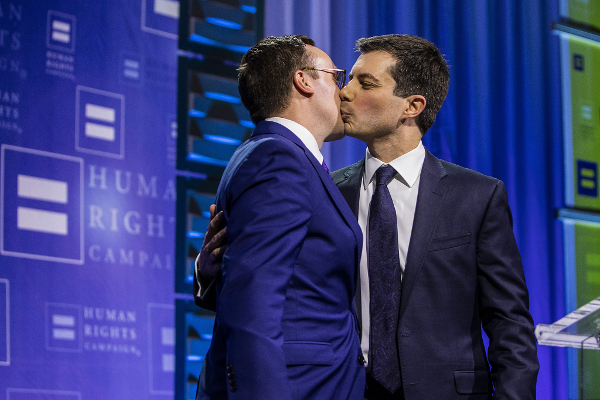 Parroting the current Soros approved talking points, Buttigieg is furious that President Trump or any other president can “just snap their fingers and do it” to appoint a Justice to the Supreme Court. “most of all we don’t want to allow this president to change the subject, which is what they’re always doing.” Then he immediately changed the subject.

All of a sudden the whole controversy was about how Trump has it in for him and his husband. Issues like health care and gay marriage “could both be in jeopardy with President Trump’s nomination of Barrett to the Supreme Court.” That’s unconstitutional liberals incorrectly whine. More than once, Biden has made that false claim and doesn’t even try to back it up. Buttigieg couldn’t either but he still fought hard.

“Well, I think what he’s saying is it’s not in the spirit of the Constitution nor the spirit of our legal system or political system for them to do this,” Buttigieg waffled. He went on to explain the liberal interpretation of the law. “Most Americans believe, as I do, as Joe Biden does, that the American people ought to have a say.” Well, Pete, Americans did have a say. We live in a republic, not a democracy. Instead of mob rule we elect representatives to make informed decisions responsibly. That’s why, we have “a Republic, if you can keep it,” Benjamin Franklin pointed out.