While Donald Trump had a detailed plan to withdraw troops from Afghanistan, Joe Biden blundered through the process, causing a serious disaster that could have lasting effects on the world, and the way future Americans will judge his presidency.

In an op-ed published on August 17th, Mike Pence discussed how Joe Biden ignored the cease-fire deal with the Taliban negotiated by Donald Trump in February of 2020.

DJHJ Media reports: “The key points of the agreement included the US removing all combat forces from Afghanistan by May 1, 2021, the Taliban denying safe harbor to terror groups, the exchange of 5,000 Taliban prisoners for 1,000 Afghan security forces held prisoner by the Taliban, and the start of comprehensive peace negotiations between the Taliban and the Afghan government.”

The cease-fire deal is a major reason why the U.S. has not suffered a single combat casualty in Afghanistan in eighteen months.

In the op-ed, Mike Pence claimed that Joe Biden’s decision to disregard the deal set the stage for “a foreign-policy humiliation unlike anything our country has endured since the Iran hostage crisis.”

By the time Donald Trump left the White House, “the Afghan government and the Taliban each controlled their respective territories, neither was mounting major offensives, and America had only 2,500 U.S. troops in the country — the smallest military presence since the war began in 2001,” Pence wrote.

Because of Biden’s failure, the cease-fire agreement went right out the window. Biden broke the terms of the agreement almost immediately after taking office, announcing that the military would be staying in Afghanistan past the May 1st deadline.

Biden made this announcement “without a clear reason for doing so,” Mike Pence said.

Beyond not having a good reason to destroy the deal, Biden threw it out without even developing a strategy of his own to replace it with.

“There was no plan to transport the billions of dollars worth of American equipment recently captured by the Taliban, or evacuate the thousands of Americans now scrambling to escape Kabul, or facilitate the regional resettlement of the thousands of Afghan refugees who will now be seeking asylum in the U.S. with little or no vetting,” Pence stated, adding, “Rather, it seems that the president simply didn’t want to appear to be abiding by the terms of a deal negotiated by his predecessor.”

Soon after Biden violated the Trump administration’s agreement, the Taliban launched their offensive because “they knew there was no credible threat of force under this president,” according to the former vice president.

“Weakness arouses evil and the magnitude of evil now rising in Afghanistan speaks volumes about the weaknesses of Mr. Biden,” Pence continued.

“After 20 years, more than 2,400 American deaths, 20,000 Americans wounded, and over $2 trillion spent, the American people are ready to bring our troops home,” the former vice president concluded. “But the manner in which Mr. Biden has executed this withdrawal is a disgrace, unworthy of the courageous American servicemen and women whose blood still stains the soil of Afghanistan.” 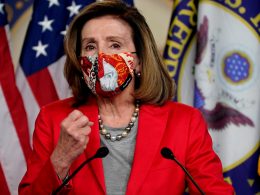