Insurrection struck the Capitol of the Great Plains state of Oklahoma as a BLM “Phalanx” two-dozen strong stormed the pristine halls of the legislature. They chanted, shouted and hurled invectives and intimidation at the members of the legislature set to vote on several controversial bills in both the House and Senate where Republicans enjoy an overwhelming majority. According to local ABC affiliate KOCO,

“A group of about two dozen people was at the Capitol protested various bills that have moved through the House and Senate this session. Some of the bills they were protesting include ones they see as anti-protest bills, anti-abortion bills and Senate Bill 2, which would ban transgender girls from being on girls’ sports teams.”

Video clips have shown the insurrection occupying the fifth floor gallery above the legislators, one legislator chairing the session could be seen futilly slamming his gavel and calling for order to no avail as BLM chanted “no justice no peace” and “Black lives matter.”

“You’re a f***ing disgrace to the whole country,” the bearded man is recorded dressing down a suited man who appears to be urging him and fellow protesters to disperse. “

In Spite of Insurrection The Legislators Work Went On

One of the most emotionally charged bills passed was one that grants immunity to drivers who strike demonstrators with their car while attempting to flee a protest as reported by the Associated Press. Oklahoma Governor Kevin Stitt signed the bill into law later that day. The state now joins Florida in providing immunity for motorists caught up in riots. Republican lawmakers in 34 states have have introduced 81 bills designed to crack down on civil unrest that has gripped the nation since 2019.

“The bill makes it a misdemeanor punishable by up to a year in jail and a $5,000 fine to block a public street and grant criminal and civil immunity to motorists that kill or injure someone while fleeing a riot.”

Another source of contention was Oklahoma Senate Bill 2 which requires that sports limit enrollment to their birth assigned gender similar to measures passed in Tennessee, Mississippi, Arkansas, South Dakota and Idaho. According to the Washington Post 33 other states are considering similar bills to prevent biological males from participating in womens and girls athletics.

The sheer quantity of near-identical state-level GOP legislative agendas show that a coordinated effort continues alongside nullification efforts designed to limit the damage that the Biden-Harris regime is capable of.

Despite COVID19, the extremely irregular 2020 Election beset by by charges of fraud and the backlash against Conservatives…
bySandy Ravage

Does This Mean the End of Political Censorship? 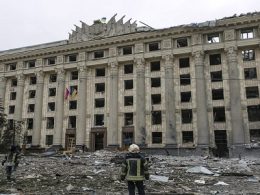 Russia has begun its offensive in Ukraine, starting with a series of precision strikes that crippled Ukrainian military…
byStaff Editor