Secretary of State Anthony Blinken dismissed the importance of peace talks taking place between Russia and Ukraine in Istanbul, claiming that the United States has seen no signs that Russia is serious about peace at the moment. Blinken did add that if Ukraine disagrees and believes that the negotiations have the potential to lead to something productive then the United States will be willing to support an outcome that is acceptable to Kiev.

USA not optimistic about peace talks

Talks began almost immediately after Russia’s invasion began but nothing significant has come of them so far, aside from a few agreements on evacuating civilians from certain areas.

The delegations reconvened at the invitation of Turkish President Recep Tayyip Erdoğan  on March 29 at the Dolmabahçe Palace in Istanbul, a former home of Ottoman Sultans.

The beautiful location may be inspiring peaceful thoughts among the attendees, but Blinken and other American officials have warned that Moscow may have no intention of going anywhere with the talks.

Ukrainian negotiators have previously stated that they believed their Russian counterparts to be genuinely committed to reaching an agreement, but the Kremlin likely has other plans.

Russian negotiators suggested the possibility of a face-to-face meeting between Volodomyr Zelensky and Vladimir Putin. Even if this occurs, one of the two will have to give ground.

Someone will have to admit defeat before the war can come to an end. Neither side feels that the other has achieved a decisive victory at this stage, so the fighting will continue until that changes.

Putin and Zelensky refuse to give up territory

Russia has no real reason to stop the offensive now; having already broken with the West economically and committed significant resources to invading Ukraine, Putin cannot stop his operation with anything less than a clear victory.

Chechen ruler Ramzan Kadyrov probably spoke for many Russians when he dismissed the negotiations as pointless on social media. Kadyrov argued that Russia must finish what it has started in Ukraine.

Zelensky, meanwhile, has demanded that Russian forces pull back to their pre-invasion positions before talks proceed. Russia obviously has no reason to agree to this. If anything might drive Russian troops to mutiny now it would be giving up ground they’ve already bled for.

The Ukrainian president has conceded that the country will not seek to join NATO but he has also vowed that any peace deal will not involve handing territory over to the Russians, including Crimea and the Donbass region controlled by Russia and its proxies before the war.

Formally abandoning Ukrainian claims to these territories will be the absolute minimum Russia will settle for. Putin is expected to demand more; many Russians will be very disappointed if the country does not have significant gains to show for its involvement in the increasingly costly war.

With neither side willing to budge at all on the important issues, Blinken’s assessment of the negotiations is likely correct. The war may still end in a negotiated peace, but only after someone wins the victory his country wants to see.

Out of more than $100 million for state National Guard, active-duty military and veterans, Ron DeSantis decided to…
byMark Megahan 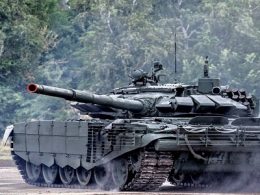 Zelenskyy Goes Full in on WW3