A mainstream news executive just admitted that the government forced the media to adhere to the narrative and spread COVID lies or else risk serious consequences.

In world history of media propaganda, there is no doubt that the current media’s response to the COVID pandemic will go down as one of the most disturbing cases.

Throughout the pandemic, the idea was pushed that everyone needed to follow the government’s approved narrative, otherwise they would be censored on social media.

Governments even lied to the people (example: “15 days to slow the spread”) and made dubious claims based on poor evidence (“mask up” to end the pandemic). But many people were not aware of the true extent of the government’s authoritarian crackdown on information.

Recently, during an exclusive interview with the British channel GBN’s show, “The Lockdown Inquiry,” with host Dan Wootton, Mark Sharman revealed his disturbing insights into the coordinated media coverage of the coronavirus pandemic.

Sharman, who is a former news executive at international network Sky News, as well as a veteran of BBC and ITV, is speaking out to reveal what news audiences have only previously been able to guess: Many news networks were ordered to adhere to the government’s pandemic narratives or risk serious consequences (such as losing their broadcasting licenses).

Wootton began the interview by stating:

“I know this is quite a big deal for you to come out from behind the camera where you’ve been an executive in the industry for so long. But I know you want to do it because you have been so disturbed by the coverage of many of your former colleagues, the organizations that you to work for over the course of the pandemic. So can you just start by explaining this chilling warning that Ofcom gave near the start of the pandemic and how you think that may have impacted the coverage?”

“I, well, I definitely think it impacted, it’s not so much an Ofcom regulation. It was advice or a warning actually.’

“Yeah, it was a warning to basically say, ‘do not question the official government line.’ Now to be fair to them, they said, you can have opposition voices on, but you must present as ‘must intervene’ if there’s any danger of harmful or misinformation.”

“So did that essentially turn presenters at the BBC, Sky News into, essentially, representatives of the government?”

“I think it did, not just on-air talent. I think, I think that warning affected all broadcasters. Most of the major broadcasters followed it and actually it was only the one or two little smaller ones who wouldn’t have that backup power who got caught.”

“I mean, a field community radio was censored for putting something out. But actually, I think what it’s led to, I think it’s created an environment which will lead to the biggest assault on freedom of speech and democracy I’ve known in my lifetime. I’ve never seen a warning from Ofcom like that. I’ve never seen the broadcasters toe the line and rather than question the government, they became cheerleaders for the government.”

“And why, Mark, why? That is the question I always ask myself because surely the job of the BBC, ITV News, Sky News to have, you know, the places where you used to work, surely, the first job as a journalist is to question the government and to question the official narrative. So why did they not do that? When it came to lockdown in process.”

“It is the first job, I mean, we’ve all been trained to ask, give both sides of a story and let the viewer decide. But clearly all the way through the pandemic, only one side of the story was given and the media, actually broadcasters and newspapers, picked up the thought that had been created by these behavioral psychologists and created this fear. The broadcasters picked it up with relish and that they really were spreaders of panic and fear.”

“They bought into the propaganda.”

“They did, they bought absolutely into the propaganda. And I think it was very dangerous, but I think you have to probably look beyond Ofcom and beyond this country, because as you said this was a worldwide lockstep occurrence. And in parallel with media, you had big tech, new media who were censoring everything.”

Be Careful the Next Time You Use a Card Reader...

While speaking about the election at a rally in Florida, the president was interrupted by someone in the…
bySandy Ravage 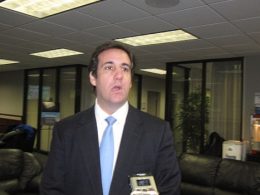 What This Politician Is Doing To Get Votes Is Beyond Sickening…