Former President Donald Trump chalked up a yuge win for New York City residents who rely on his skating rinks for recreation. He kept them from being canceled by an Imperialist mayor who wanted to shut them down simply because they have the Trump name on them. City Hall folded up faster than a back-pack tent after the frustrated masses got ready to hold an insurrection.

Both the Lasker and Wollman ice skating rinks in Central Park were closed down tight simply because City Hall doesn’t like the former president. Normally they would be open until some time in April, depending on the weather. It was a blatant attempt for de Blasio to “freeze out his political rival,” Fox reports.

The spokesunit for City Hall, Bill Neidhardt, told the New York Post. “New York City kids deserve all the time on the ice they can get this year. The Wollman and Lasker rinks will stay open under current management for the few weeks left in this season.”

Even if they are owned by a deplorable nationalist. “But make no mistake, we will not be doing business with the Trump Organization going forward.”

Mayor de Blasio felt safe making unilateral decisions because the Imperialist faction has suspended the Constitution. He used his own authority as king of New York to breach the legally binding contracts which the city has with the Trump Organization.

He claimed it was because the former president “incited a riot at the Capitol” but he wasn’t convicted of the charge so that excuse won’t hold water.

City officials thought they could get away with it in our new and improved post-constitutional open borders global government but the skaters didn’t get that memo from the Open Societies Foundations.

Instead of Donald Trump, “the real people they’re hurting are the 2,500 children that have been benefiting from the skating program this season and 250 innocent employees who have been keeping this going for us,” relates 49-year-old Lee Klausner as she watched her two daughters skate.

Eric Trump, who’s still allowed to use Twitter, for now, posted a thank you note to City Hall.

“Mr. Mayor,” he tapped out, “Thank You for keeping Wollman and Lasker Rinks open — you’ve just made countless NYC families (along w our 250 employees) incredibly happy. This is a bright moment for New York and please know we appreciate it.”

De Blasio and his cronies are fuming that they didn’t get their way but the most important thing is that the children, who can’t go to school because of the Covid lockdowns, at least have a chance to get some kind of recreation and social activity.

To Democrats, canceling out anything related to Trump is a lot more important than doing anything for the citizens who they’re supposed to represent and protect. 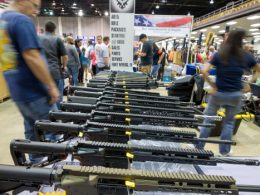