Coney-Barrett, the assigned Justice for the Seventh Circuit Court of Appeals received the emergency application for injunctive relief to prevent Biden from carrying out his lawless executive order.

According to NPR, in a matter of hours after Coney-Barrett’s ruling, a separate challenge to Biden’s action, one initiated by six Republican-led states (Nebraska, Missouri, Arkansas, Iowa,
Kansas and South Carolina) was thrown out by a Federal District Court Judge in Missouri.

The ruling from Judge Henry Autrey has a familiar tone for those who followed the legal fallout of the 2020 election. Once again, the states’ attempts to stop the unconstitutional actions of the Democratic party have been dismissed due to “standing.”

Autrey wrote, “Because Plaintiff States – Nebraska, Missouri, Arkansas, Iowa, Kansas, and South Carolina – have failed to establish Article III standing, the Court lacks jurisdiction to hear this case. It should be emphasized that “standing in no way depends upon the merits of the Plaintiff[s’] contention that the particular conduct is illegal.” Warth, 422 U.S. at 500. While Plaintiffs present important and significant challenges to the debt relief plan, the current Plaintiffs are unable to proceed to the resolution of these challenges.”

He added, “Standing is a threshold inquiry; it requires focus on the part[ies] seeking to have [their] complaint heard in a federal court, and it eschews evaluation of the merits. The court is not to consider the weight or significance of the alleged injury, only whether it exists.” Coalition for the Environment v. Volpe, 504 F.2d 156, 168 (8th Cir. 1974) (emphasis added). Therefore, the case will be dismissed for lack of jurisdiction.”

Just as it was in 2020 and 2021, here we are presented with another case of irredeemably illegal, unconstitutional actions from the Democrats and the Biden-Harris regime, that will not be considered on their merits due to a narrow reading of the law, that curiously favors the left.

NPR wrote that the case refused by Justice Coney-Barrett will continue in the Seventh Circuit, where it is being heard on appeal. This particular challenge was brought by the “Brown County Taxpayers Association, a Wisconsin organization made up of around 100 taxpaying individuals and business owners that advocates for conservative economic policy.”

The group of taxpayers argued that the Biden admin and his Department of Education are acting outside of their authority, as the ability to forgive loans lies exclusively with Congress.

The case was similarly dismissed by a Federal District Court Judge on standing. In this case relying on a 2007 Supreme Court ruling that said, “if every federal taxpayer could sue to challenge any Government expenditure, the federal courts would cease to function as courts of law and would be cast in the role of general complaint bureaus.”

In short, they ruled that being forced to pay taxes to fund policies we disagree with is not an ‘injury in fact’ even if those policies undeniably harm us.

The Switzerland-based International Organization for Standardization (ISO) approved a merchant category code (MCC) for gun retailers. This will…
byStaff Editor

SWAT went in, ended the standoff, and started removing bodies. It was the end of a very long…
byMark Megahan 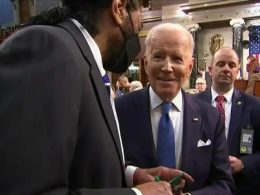