A senator from Alaska, Murkowski is one of seven other RINO Republicans who voted in favor of having President Trump face a second impeachment trial.

She recently announced her desire to keep her political standing and is running for re-election.

Trump announced that he will strongly campaign against the backstabbing senator and has endorsed her main competitor, former Alaska Commissioner of Administration Kelly Tshibaka.

Murkowski made a video discussing her main goals: “I’m running for reelection to continue the important work of growing our economy, strengthening our Alaska-based military and protecting our people and the natural beauty of our state.”

She was basically born into the political scene seeing that her father, Frank Murkowski spent years as a senator and then eventually became governor. The RINO herself has been a senator since 2002 showing that term limits really are something to consider getting rid of corrupt career politicians.

Alaskan GOP members were not happy with her choice to join the witch hunt against Trump so they voted to censure her in March 2021.

Out of the seven Republicans senators who tried to convict Trump, Morkowski is the only one trying to get elected again.

She is trying her best to convince GOP voters that she is the lesser evil at this point in regards to the other choices.

“In this election, lower 48 outsiders are going to try to grab Alaska’s Senate seat for their partisan agendas. They don’t understand our state and frankly, they couldn’t care less about your future,” Murkowski said.

“My commitment to Alaska is the same one I made during my first campaign. I will work with anyone, from either party, to advance Alaska’s priorities. And I will always stand up to any politician or special interest that threatens our way of life,” she continued.

Time will tell if another RINO wins re-election or if the voters refuse to support candidates who’ve turned their backs on them. 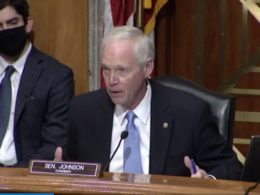