Capitulating to the Biden administration and the Democrats, a group of ten Republican senators has agreed to support “red flag” laws sought by gun control advocates as part of a “compromise”  deal reached under pressure from the White House and liberal activists. President Biden celebrated the agreement but made it clear that it is only the beginning. With bipartisan support in the Senate the agreement is expected to easily and quickly pass.

The list of Republicans who switched sides to negotiate a gun control plan that would be agreeable to their Democrat colleagues holds few surprises.

It’s probably no coincidence that many of these senators are older and not seeking reelection. Burr, Toomey, and Portman are not running this year; each is being replaced by a Republican nominee who is much more conservative.

With nothing left to lose, these senators can afford to support a gun control compromise that their base would likely object to, though most of the ten have already earned reputations for being those who are willing to work with Biden and Chuck Schumer.

Much of the agreement is largely benign, including new support for school security measures and funding for mental health programs.

These are ideas that most conservatives are willing to support in response to the mass shooting epidemic and the Republican senators would meet with few objections if they had limited themselves to supporting these proposals.

The agreement also encourages the creation of red flag laws by state governments that would enable law enforcement to seize guns from a person deemed to be a threat.

Ostensibly this is to be done only when a person is believed to pose a danger to themselves or to others so that potential mass shooters can be disarmed before they carry out an attack.

In practice, conservatives fear that if the government is given the power to confiscate firearms from anyone it identifies as dangerous the laws will quickly be weaponized for political purposes.

That idea isn’t particularly far-fetched, as the Biden administration has already instructed federal law enforcement to monitor concerned parents as a source of potential anti-government violence.

The possibilities for a government equipped with red flag laws are endless, as are the future steps Democrats are already planning to further restrict gun rights now that a sizable contingent of Senate Republicans is agreeable.

Republican Rep Clings to Her Seat

With the midterms only months away, Democrats are facing a rebellion from a crucial demographic. Hispanic voters are…
byStaff Editor

She was almost gone. Rep. Ilhan Omar (D-MN) barely made it by her primary, winning by only two…
byAnthony Smith 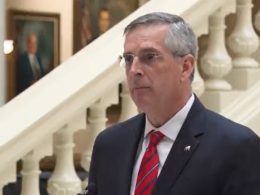