At his Minnesota rally, prior to knowing about the passing of Justice Ruth Bader Ginsburg, President Trump announced that he wanted to nominate Senator Ted Cruz as his next Supreme Court Justice.

The left is already panicking about President Trump’s list of possible Supreme Court nominees. One left-wing Twitter user shared the clip of the president discussing Senator Cruz as a possible choice:

On the night RBG passed away Trump is in Minnesota telling his cult he wants Ted Cruz on SCOTUS…are you paying attention yet pic.twitter.com/a7peXeD68P

On Wednesday, President Trump announced that he had added 20 names to his existing list of 25 possible picks to fill a future vacancy on the Supreme Court. The list included prominent Republican Senators Ted Cruz, Tom Cotton, and Josh Hawley, among other highly qualified choices.

Many credit the president’s original list of Supreme Court picks as an asset in his 2016 election victory over Hillary Clinton. This may become a major factor in the upcoming election as well.

Referring to the appointment of Supreme Court Justices as “the most important decision a president can make,” Trump told his voters that releasing a list of potential choices up front should be an obligation that presidential contenders should have to their constituents. According to Politico, President Trump was the first to do this, in 2016.

“Our cherished rights are at risk,” Trump said while speaking about the November election from the Diplomatic Reception Room of the White House. The president then asserted that the Democrat party is at the forefront of an “extreme movement,” which, if “granted a majority on the Supreme Court, will fundamentally transform America without a single vote of Congress.” 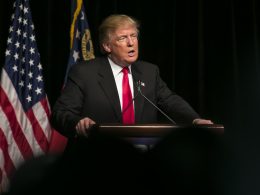 One notorious Trump hater has begun to see the light. While he doesn’t seem to be changing his…
byAnastasia Boushee