A major ally of former President Donald Trump has announced that he will be leaving Congress at the end of December to become the CEO of his new social media company.

Rep. Devin Nunes (R-California) has made an official announcement that he will be leaving Congress at the end of December 2021 to head up Trump’s new social media company.

In a statement released on the evening of December 6th, Trump Media & Technology Group revealed that Nunes was going to be appointed as the company’s new CEO.

“Congressman Devin Nunes is a fighter and a leader,” Trump said in the statement. “He will make an excellent CEO of TMTG. Devin understands that we must stop the liberal media and Big Tech from destroying the freedoms that make America great. America is ready for TRUTH Social and the end to censorship and political discrimination.”

The press release also included a statement from Congressman Nunes, which read: “The time has come to reopen the Internet and allow for the free flow of ideas and expression without censorship. The United States of America made the dream of the Internet a reality and it will be an American company that restores the dream. I’m humbled and honored President Trump has asked me to lead the mission and the world class team that will deliver on this promise.”

Nunes, a former dairy farmer who was first elected to the House in 2002, was seen as the frontrunner to become chairman of the powerful House Ways and Means Committee if the Republicans had taken back the majority in the 2022 midterms.

House Minority Leader Kevin McCarthy spoke out about Nunes’ decision to step down, stating: “There is no better person prepared to compete head-to-head and lead an alternative to the big tech and big media cartel that has carried water for the Democrat Party for years than Devin.”

“Devin’s departure leaves a gaping hole in this institution, but his dedication to our country will persist,” McCarthy added. 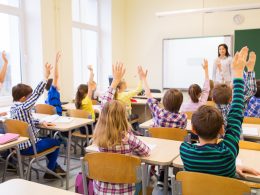 Read the Classroom ‘Antiracism’ Survey That Has Maryland Parents ‘Livid’

Soon after Joe Biden purged the Pentagon of Donald Trump‘s appointees, installing his own loyalists into key positions,…
bySandy Ravage