President Donald Trump has made a bold move that has Democrats furious with their leftist hypocrisy and desire to see America crumble away from its capitalist base.

The president has extended the national border emergency to last until February 2022. This was after a huge number of immigrants from Central America were found to be heading to the U.S.-Mexico border traveling in caravans.

President Trump has been trying to fix the illegal immigration fiasco that has plagued the United States. However, Democrats want illegal aliens to vote and encourage illegal immigrants to pour into America at an unregulated rate.

“The ongoing border security and humanitarian crisis at the southern border of the United States continue to threaten our national security, including by exacerbating the effect of the pandemic caused by COVID-19 … but further action is needed to address the humanitarian crisis and to control unlawful migration and the flow of narcotics and criminals across the southern border of the United States,” Trump said in an announcement.

In February 2019, President Trump declared the emergency due to bold Democrats laying roadblocks in the construction of the border wall and immigration reform.

President Trump Comments on the Matter

President Trump commented on the emergency saying it “must continue in effect beyond February 15, 2021,” adding: “I am continuing for 1 year the national emergency declared in Proclamation 9844 concerning the southern border of the United States.”

“In 2015 and 2016, Trump campaigned on building a wall along the U.S.-Mexico border. His administration, so far, has constructed more than 450 miles’ worth,” the Epoch Times reports.

Danger Heading to the US

Video and photographs showed a harrowing sight of a bold caravan from Honduras violently breaking through the Guatemala border while trying to get to the United States.

A surge of migrants headed to our border is entirely predictable, and it's a public health catastrophe. pic.twitter.com/EPIFlTTpvQ

“Joe Biden promised amnesty throughout his campaign. A surge of migrants headed to our border is entirely predictable, and it’s a public health catastrophe,” said Sen. Tom Cotton

So thousands of maskless immigrants don’t concern the COVID-obsessed Democrats, but allowing healthy individuals to keep their businesses open and running is completely out of the question. Got it.

Self-described “soft boy” Tim Miller, host of  The Bulwark’s “Not My Party” a minor Snapchat and YouTube channel…
byMatthew Holloway 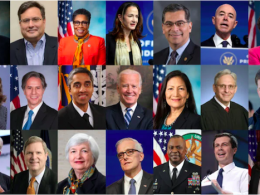 According to John Santucci of ABC News, Attorney Sidney Powell was spotted at the White House, possibly meeting…
byAnastasia Boushee