Democrats have already begun turning on Joe Biden. As many on the right expected, Democrats were only going to stand by him when he was running to defeat the man they desperately wanted gone: President Donald Trump.

Now that Trump is presumably going to be gone, the unity within the Democrat party is gone too.

West Virginia Democrat Senator Joe Manchin, known as the most moderate elected Democrat, told the Washington Post on January 8 that he would “absolutely not” support passing a round of $2,000 stimulus checks as a first priority.

According to the Biden campaign, the $2,000 stimulus checks are a key component of his plans upon taking office, and due to the Democrats’ slim majority in the Senate, a vote from Manchin may be necessary.

President Trump had been pushing Congress to increase the most recent round of stimulus checks from $600 to $2,000, while eliminating the wasteful spending in the bill. Senate Majority Leader Mitch McConnell blocked the vote on that increase, a move which many believe contributed to the Republicans losing the Senate.

Manchin’s spokesperson has since clarified his statements to the Post, noting that the senator is not against the stimulus checks in general, he just does not believe they should be the first priority in the Senate. This puts him at odds with Senate Democrat Leader Chuck Schumer, who has called for the checks to be the first priority of Congress.

After Jon Ossoff and Raphael Warnock won the Georgia Senate runoffs on January 5, the results of which are disputed due to evidence of fraud and irregularities similar to what happened during the presidential election, Democrats now control the Senate.

The balance of power in the Senate is 50-50, with the vice president, presumably Kamala Harris, breaking the tie.

From this slim majority, many are speculating that moderates such as Manchin will hold a significant amount of power over passing bills in the Senate.

If Joe Biden doesn’t start uniting his party, he is going to be facing a tough battle to push his agenda through in the next four years. Many conservatives hope that Manchin becomes the voice of reason for the Democrats, pulling them away from the more radical policy positions being adopted by the party. 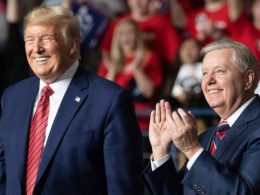