20-Year Veteran NYPD Officer QUITS and His Reason Why Will…

A 20-year veteran of the New York City Police Department (NYPD) celebrated by retirement by criticizing the agency he once worked for.

41-year-old Thomas J. Gambardella officially retired from the force at a monument within the NYPD. And while he initially loved his job, overtime Gambardella began to resent it.

The New York Post has previously reported on cops retiring in large numbers. In fact, over 2,000 officers quit the NYPD this year alone, not to mention over 1,000 retired and hundreds resigned.

At the end of his last day, this is what Gambardella posted to Facebook:

“I’m officially retired today! From this sorry excuse of a s–t job. Thank God, I’m free at last!… I loved everyone I worked with and ‘some’ of the people I’ve worked for. But this job is no one’s friend. Time to live free. I’ll see you all out there!” It appears Gambardella became one of numerous officers that have grown sick and tired of Democrats’ soft-on-crime policies.

“I was a true believer, I wasn’t a bag of s–t. I worked some intricate details. I gave a lot of my blood, sweat and tears. But no more.”

“It’s the worst f–king job in the world. They own you. They’re not your friends. All that talk about the ‘big blue family.’ They don’t care. If I die tomorrow they wouldn’t give a sh-t. If I needed something it ain’t gonna happen. I’m better off just saying a prayer.”

“Crime is soaring and cops are leaving in droves,” Gambardella added. “Anybody can see that. All this liberalism is obviously a failure. But this is what they wanted. It’s a stupid experiment and it’s the people who will pay in the end.”

In his retirement post, Gambardella can be seen wearing a “Let’s Go Brandon!” t-shirt while flipping the bird to an NYPD Headquarters memorial. In 2006, Gambardella was named Officer of the Year when he worked in the 68th precinct in Bay Ridge, Brooklyn.

He originally joined the police force in 2002 and had recently served in the detective squad at the 70th precinct in Kensington. Records revealed that Gambardella has 14 complaints lodged against him, in which he was exonerated in four of them, another six were labelled “unsubstantiated” and one “unfounded.”

None of the complaints led to disciplinary action.

Airbnb Forced To Remove Listing Described As A 'Slave Cabin' 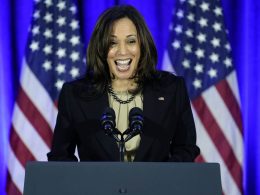