The New York Post recently reported on a shocking “Italian Job”-style heist that was just committed by a group of thieves, who stole upwards of $150 million in jewels from a Brink’s armored truck. According to authorities, the driver of the truck had been driving from one convention show to another when he was ambushed by the thieves.

The incident took place on the morning of July 11 in northern Los Angeles County, just as the jewelry was traveling by truck from a trade show in San Mateo just one day prior, near the Bay Area, to Pasadena.

Now, the FBI is stepping in to investigate the crime.

An FBI spokeswoman mentioned that the truck had almost made it to its destination before it was robbed by thieves in Lancaster.

Apparently a Brinks spokesperson claims that the total value of the stolen jewelry is closer to $10 million rather than $100 million.

In response, Swanson disagreed, claiming that the value was actually much closer to $150 million due to small business vendors underinsuring their products in order to save money, which, as we can see, could backfire on the vendors who may have had their entire livelihoods now stolen from them.

“That’s where the discrepancy comes in. These are mom-and-pop operators. They’re devastated. Some of these people have lost their entire livelihoods.”

One of the jewelers shared that selling these goods is how he lives.

“My life — that’s how I live, that’s how I feed my kids … You’re looking at 19-karat yellow gold with over 100 carats of multicolored sapphire,” the jeweler said of some of his items. “Sunday, you had merchandise. Today, you don’t have anything.”

Very few places have been hit as hard as the Marxist havens that are San Francisco and Los Angeles, which have been terrorized by a spate of smash-and-grab robberies, follow-home burglaries, assaults, and organized retail crime, thanks to leftist policies that promote lawlessness and hamper law enforcement.

These ‘defund the police’ agendas have allowed criminals to operate and organize largely unchecked, which has led to criminals taking bigger, more sophisticated risks and targeting higher-value prizes for their efforts. And, why wouldn’t they? After all, crime goes largely unpunished in liberal areas.

So, organized criminal gangs are taking full advantage – for some, the days of petty smash-and-grabs are long gone. 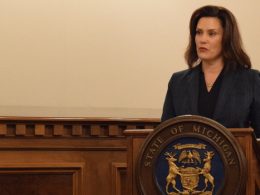 In yet another case of biased judges ruling in favor of the establishment, an Obama-appointed judge has denied…
bySandy Ravage