Retail giant Target is learning the hard way that if you choose to go Woke, you end up Broke.

Compared to the $1.82 billion last year, the company’s net earnings have collapsed 89.9% in the second quarter to $183 million.

Meanwhile their operating income has dropped over 87% year-over-year to $321 million. The company attempted to take action to reduce its inventory levels, which caused a drop in its operating margin of 9.8% to 1.2%.

At the start of June, Target made attempts to match consumer demand  by cancelling orders and offering markdowns. As a result, revenue did increase in the second quarter, in addition to in-store and online sales.

‘The Gateway Pundit’ explains how embracing the Woke agenda was one of Target’s downfalls.

Target was sent reeling in 2016 when it went all-in for the transgender agenda and announced a policy allowing men claiming to be women to use women’s dressing rooms and bathrooms.

The company defended its left-wing policy even as customers rose up in anger, Breitbart News reported at the time.

Even before that, Target retooled its stores to satisfy the LGBT lobby by eliminating gender-specific signage because it wasn’t “inclusive” enough, according to NBC News.

This year, with the boycott over its transgender policies only a few years in the past, Target doubled down and began selling clothing designed to help people “transition.”

The Post Millennial reported in May that Target was selling chest binders and packing underwear, “which gives the appearance of a phallus.”

The company also has an extensive line of “pride” clothing, including for children, to push the LGBT agenda.

Target is selling chest binders for gender dysphoric girls so they can crush their breasts to try and appear more like boys. This is no different than Walgreens selling laxatives specifically for people with anorexia. Abhorrent and insane.

This is grooming and child abuse. Period. A child’s size 4-5 trans rights shirt. A baby newborn onesie. A QUEER SHIRT and dish towels @SloanRachmuth @Target can kiss my cisgender ass. WITH MY CHILDREN – hell no- and the baby books!!! Guess what im not a bigot! @deb_fillman pic.twitter.com/AryMs2vKdN

For his part, director Robby Starbuck drew a straight line from Target’s decision to sell LGBT merchandise to its massive loss of profits.

Maybe @Target still doesn’t get it but I’ll try to help spell it out for them: When you decided to sell trans toddler merch and chest binders to kids, we went to other stores to spend our money and you’ll continue to feel the squeeze over your decision to sexualize kids. pic.twitter.com/yiIoHj9Bfi

The outlet believed that “Joe Biden’s spiraling economy has brought about dark days for boardrooms across the nation, certainly. And Target may not necessarily be losing its shirt specifically because of its unpopular LGBT policies.”

But those policies have led to boycotts and a lot of negative publicity for the retail giant. As it tries to dig itself out of this fiscal disaster, Target may be in danger of becoming the next corporation to go broke after going woke, the outlet stated.

White House Twists the Facts and Flips the Script 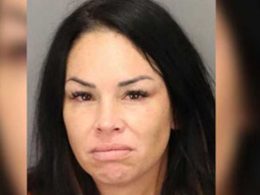 Early Election Results Are In

In what was presented as an interesting matchup by the mainstream media, Greg Abbott has soundly won re-election…
byStaff Editor

Decapitated Animals Discovered, Authorities Believe It Was From…