‘The people’s government has determined that you are a danger to the state, you are hereby commanded to surrender your guns’. We aren’t very far from that Soviet Union-Esque proclamation today as the ‘‘Extreme Risk Protection Order and Violence Prevention Act of 2021″ has been filed in Congress… by a so-called Republican. Florida Senator, former Presidential Candidate. lol cow and staggering RINO Marco Rubio has filed the latest “Red Flag gun seizure” bill himself. It’s a perfect mate for HR 127 and completes the destruction of the Second Amendment.

The Most ‘Gun Grabbing’ Gun Grab Ever, They Literally Just Show Up and Grab Your Guns

According to SecondAmendmentDaily.com even the NRA has supported this bill, adding moral bankruptcy to their financial bankruptcy “To the great shame of gun owners everywhere, the NRA backed his bill!  Their top lobbyist, Chris Cox, even cut a video endorsing the concept!” Rubio has officially crossed the Rubicon on this one, this is quite literally a gun confiscation order that denies firearm owners due process. Chris Cox hides behind the “ex parte” hearings which according to the NRA apparently constitutes “due process” however, this creates a scenario wherein American’s rights are violated without their having an opportunity to face their accusers, a concept which flies in the face of our founding values. The drafters of the Constitution would be absolutely appalled.

The following paragraph cannot and should not ever be tolerated in American law or jurisprudence.

Most of The People You Know Can Report You, And You Can’t Stop It

This act establishes a framework for expanded Extreme Risk Protection Orders for which a person can be ‘reported’ as a danger to themselves or others by a wide-range of individuals (for likely very petty reasons) and have their guns and ammunition seized by law enforcement. Under the law, you cannot stop or interfere with the seizure an if you attempt to you will be arrested (or worse), you may only challenge it AFTER the fact to get your property back. A court has up to 14 days to do so, and the authorities may keep your guns and ammunition for up to a year.

The classifications of persons who can file a ‘report’ on a given individual are so broad as to invite extreme abuse and manipulation of the orders for retaliatory or harassing purposes. Under the law “the term ‘family or household member’ means, with respect to a respondent, any:

Second Amendment Daily came up with a shorter (and much funnier) list that is just as accurate, 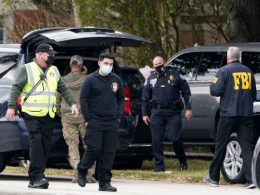