French President Emmanuel Macron was expected only a month ago to have a comfortable reelection coming his way in the country’s two rounds of voting in April. Instead, right-wing challenger Marine Le Pen has surged in the polls and appears to have a very real chance of unseating Macron. One poll even shows Le Pen with a slight lead over the incumbent; almost all polls show an effectively tied race between the two leading candidates with only days to go before the election.

Le Pen and Macron effectively tied ahead of election

France has a first round of voting on Sunday, April 10. A large field of candidates will be competing for the top two spots in this round so that they can advance to the April 24 run-off.

It will almost certainly be Macron and Le Pen who advance to that second round, meaning that this will be a repeat of their 2017 match-up.

In 2017, however, Macron won an easy victory in the run-off as Le Pen failed to expand her support beyond the right and Macron kept a strong hold on the center. That will not be the case this time.

Le Pen has experienced  a last minute surge after months of failing to break out from the pack of other candidates. After a lengthy period of uncertainty she has now firmly established herself as the leading anti-Macron option.

The weakened French left has been left behind, with many supporters of third place candidate Jean-Luc Mélenchon planning to either abstain from voting in the second round. Those who still plan to vote are evenly split between Macron and Le Pen.

Le Pen’s momentum in the polls will peak eventually, but when the first round is complete and she stands as the only anti-Macron candidate there may be a chance for her to further expand her base of support among supporters of other candidates.

Momentum turns against the incumbent

It is her ability to draw from disillusioned leftists and moderates that is really separating this election from 2017 for Le Pen. This success has come from a mixture of luck and strategy.

The war in Ukraine could have meant the end of Le Pen, who has historically supported strengthened ties with Russia and Vladimir Putin. Macron hoped that the crisis would inspire trust in his ability to lead France through uncertain times.

Instead Macron’s boost from the start of the war has evaporated and Le Pen has seized the opportunity to convince skeptical voters that they can trust her to stick up for their interests.

Le Pen has largely chosen to respond to the war by focusing on the ways in which its impact on the French public can be minimized, and she has dropped her usual anti-migrant stance to embrace Ukrainian refugees.

As fellow Europeans these refugees are widely accepted in France, and Le Pen has not hesitated to demonstrate her support for them while still assuring the French working class that she is the candidate who can help them through a difficult economy.

Five years ago Macron seemed like the safe choice for most French voters. Now he has had his turn as president and is no longer seen as the lesser of two evils by many. They may not love Le Pen, but if they hate Macron enough they just might finally vote to give her a chance at the presidency. 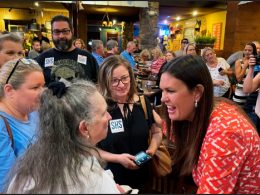