An international manhunt for a cop killer has finally come to an end as authorities arrested the man accused of the “savage execution” of a Harris County sheriff’s deputy.

The arrest was made by U.S. Marshals alongside the Gulf Coast Violent Offenders Task Force, who teamed up with authorities in Mexico to arrest Oscar Rosales in Ciudad Acuña, just across the border with Texas.

Though it is not clear whether the alleged cop killer is still in Mexico or in Texas, officials have reported that they are in the process of making arrangements to return him to Houston.

The Houston Police Department’s official Twitter account sent out a tweet on the morning of January 26th confirming that the international manhunt had ended, Rosales was in custody, and that he had been arrested in Mexico.

“ARRESTED: Oscar Rosales was taken into custody by law enforcement authorities in Mexico earlier today. We are working with our law enforcement partners to begin the process of returning Rosales to Harris County,” the police department wrote, sharing their previous tweet asking for tips regarding the suspect’s whereabouts.

ARRESTED: Oscar Rosales was taken into custody by law enforcement authorities in Mexico earlier today. We are working with our law enforcement partners to begin the process of returning Rosales to Harris County.
Additional information will be released here.#hounews https://t.co/30yWzYkPx2

The GOP Times previously reported on the details of the shooting, writing:

“A deputy sheriff in Harris County, Texas was shot to death during a routine traffic stop while still sitting in his patrol car.

A manhunt has been launched for the suspect after 47 year old Cpl. Charles Galloway, a 12 year veteran of the Harris County Sheriff’s Office, was murdered at approximately 12:45 a.m. during a routine traffic stop.

According to Houston Police Chief Troy Finner, witnesses told police that a man got out of his vehicle, fired multiple shots at Galloway, and then drove off.

Galloway was shot before he was able to get out of his patrol car, and had no time to defend himself, according to Heap.”

Instead of focusing on the growing threat of China, the U.S. military has set its sights on Fox…
bySandy Ravage 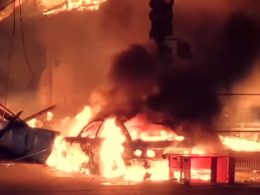