Deputies in Florida have arrested a man carrying an active pipe bomb outside of a rally that was being held to show support for a January 6th detainee.

The rally had approximately 85 attendees, and took place outside of the Pinellas County Justice Center in Clearwater on the evening of January 6th. The protesters were there to show their support for Jeremy Brown, a former Army special forces soldier, current member of the Oath Keepers, and a one-time congressional candidate. Brown was arrested on September 30th for “knowingly entering or remaining in any restricted building or grounds without lawful authority” in connection with the January 6th Capitol riot, and is being held at the Pinellas County Jail without bond on federal charges.

Garrett James Smith, 22, was arrested near the Tampa Bay-area protest while wearing identity-concealing black bloc clothing and gear that is commonly associated with members of the radical left-wing terrorist group Antifa.

According to a press release from the Pinellas County Sheriff’s Office, “At approximately 7:24 p.m., deputies in the area observed a male, later identified as Smith, dressed in all black clothing, a face covering, and carrying a black backpack, running away from the direction of the protest.”

When the deputies spotted Smith, he began to run. They pursued the suspect, and caught up with him approximately one block away from the rally. He was then arrested on a charge of loitering and prowling.

Upon searching him, deputies discovered a “pipe-type explosive device” inside his backpack.

According to Pinellas County Sheriff Bob Gualtieri, there was also a black helmet in the backpack that had “logos that have been seen in protests by groups in Oregon and other places of the country.”

Smith’s family told Gualtieri that Smith had traveled to Portland, Oregon, and returned several months ago.

Painted on the helmet were three red arrows with a circle around them.

“The Three Arrows, the symbol of the Eiserne Front (Iron Front), originate in Weimar Germany and were adopted by the Social Democrats (SPD) to fight the Nazis, Communists (who they rightfully saw as puppets of the Soviet Union) and Monarchists who wanted the Kaiser to return. The Iron Front were a paramilitary organization that believed in violence. More recently the Three Arrows have been adopted by the US Antifa movement.”

A lot of the items on Smith’s list are commonly seen at Antifa riots across the country.

After taking the terrorist into custody, authorities searched his residence in Oldsmar, Florida, where he lives with his parents. There, they found more explosive devices, as well as tape and nails for use in grenades.

According to reporting from the Post Millennial, “Bomb squad investigators from the Hillsborough County Sheriff’s Office and the Tampa Police responded to the home and determined the devices were homemade IEDs.”

During a press conference on January 7th, Pinellas County Sheriff Bob Gualtieri stated: “Smith refused to give any information, he refused to talk to deputies, so we really have no idea as to what his political leanings are and whether he supported or opposed the protesters at the jail. We also don’t know exactly what his plan was or why Smith was running away from the protest area when he was apprehended by deputies and before he had an opportunity to detonate the explosive device.”

Of course, that statement can be easily disproven, so the question is: why is the sheriff even trying to claim otherwise? It is pretty obvious which way Smith is leaning, and even the police report shows this.

The Post Millennial reports: “The arrest affidavit lists ‘ANTIFA’ and anti-government violent extremism as aggravating factors in his arrest.”

Regardless, Smith does not have any past criminal history, and is being charged with three counts of making and possessing a destructive device and one count of loitering and prowling. He is being held on a $300,250 bond.

“Smith has no criminal history, no social media accounts that we can find, and there’s no prior intelligence information about Smith,” Gualtieri said in the press conference. “Smith is what we call a ‘sleeper,’ and these are the most concerning individuals because there’s no opportunity to intervene and thwart their criminal activity until they actually act.”

“We’re fortunate in this situation that something caused Smith to flee before he ignited the explosive device and the deputies were able to apprehend him,” he added.

During a press briefing on August 26th following the terrorist attack in Kabul, Joe Biden once again embarrassed…
byAnastasia Boushee 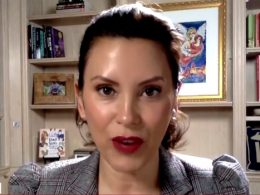