John McAfee, an anti-virus software pioneer was arrested on Tuesday in Barcelona, Spain while trying to board a flight heading for Istanbul, Turkey. He’ll soon be extradited back to the United States on tax evasion charges.

John McAfee became well known by the end of the 1980s as the pioneer successfully marketed anti-virus software, which was one of the first to be widely used.

While attempting to board a flight to Turkey he was taken into custody in Barcelona, Spain.

The 75-year-old creator was born in the U.K but has an American nationality and therefore had been charged by U.S. authorities for tax fraud allegedly committed between 2014 and 2018.

He’s also charged with failing to “declare several million in income from the promotion of crypto-currency, consultancy services, conferences and the sale of rights for a future documentary on his life.”

The Department of Justice maintains that McAfee had the money for personal things such as real estate and a personal yacht put into “other people’s accounts and in virtual currencies to avoid declaring them for tax purposes.”

The indictment was initially sealed in June but as of Monday, the Department of Justice made the information public. McAfee has been able to elude authorities since 2019.

Currently, the anti-virus pioneer is being held in “pre-trial detention” and “expected to be extradited to the United States shortly.” After obtaining $7.6 billion in 2010 for McAfee Association, the company he created, he has been known to live a playboy lifestyle.

His former company changed its name to Intel Security to get away from the stigma that McAfee carries after his multiple arrests.

Over the past eight years, McAfee was under suspicion of killing his neighbor in Belize but after a $25 million settlement, the matter was quieted. He then tried to slip into Guatemala where he was ultimately deported back to the United States.

When back in America, he reportedly “quite literally married the first prostitute to solicit him.” Despite his long criminal record, he attempted to run for president in 2016 and 2020.

After more run-in with the law, he was deported to London and made his way around the U.K. until his most recent arrest in Spain.

Adding an extra digit worth of votes is not what most people would call a “mistake.” The hand…
byMark Megahan 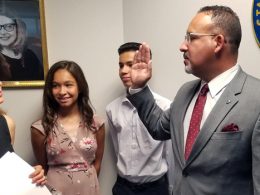