A recall for Los Angeles County District Attorney George Gascón will not be allowed on the ballot even though recall efforts were able to collect more then 700,000 signatures.

In an apparent effort to make sure everything was legitimate the Registrar-Recorder/County Clerk Dean C. Logan announced that his office has examined the signatures and had only been able to verify 520,050. Over 195,780 signatures were declared invalid which left the recall efforts short of about 46,000 votes. the requirement of votes needed to appear on the ballot is 566,857.

As a result, voters will not be able to vote to recall the DA on Nov. 8.

“The DA has characterized the efforts to remove him from office as a right-wing campaign to undermine his work to address institutional racism in the criminal justice system,” reported the LAist.

Elected in 2020, Gascón previously served as a police chief in Mesa, Arizona, as assistant chief in the LA Police Department, and as the district attorney of San Francisco.

The Hill reported that Jackie Lacey, the two-term incumbent Democrat that Gascon unseated, was “unpopular among members of the Black Lives Matter group,” reports .

However, the DA’s critics have argued that he is too soft on crime. They go so far as to say his “pro-criminal agenda” has made the city a “nightmare.”

“Criminals feel emboldened, residents unsafe, and victims abandoned,” the organization pushing the recall effort wrote on its website. “Gascon REFUSES to prosecute juveniles as adults under any circumstances, even rape, murder or other heinous crimes, even if days shy of turning 18.”

Recalling Gascón is the only way to “restore order, public safety, and to ensure victims receive the justice they deserve,” according to the group.
Source 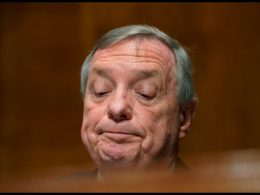 One Florida sheriff has a chilling message for citizens: arm yourselves. In today’s society, you never know when…
bySandy Ravage