Richard Simmons, a beloved fitness icon,  is “living the life he has chosen,” according to his representative following a six-year silence.

“Thank you, everyone, for your kindness and love! Love, Richard,” wrote Simmons on Facebook, sharing an image of a smiley face holding a ‘Thank You’ sign. “Love, Richard.”

A new TMZ documentary, What Really Happened to Richard Simmons, investigated his retreat, prompting the guru to make his first statement to fans in five years.

Richard Simmons and Sweatin’ to the Oldies, a series of bestselling VHS tapes that made fitness available, even enjoyable, to the general public. Simmons existed before Peloton and YouTube at-home workouts. After dominating the fitness industry for years, Simmons disbanded his studio in 2014 and appeared to vanish from public life.

Simmons called the “Today” show in 2016 to dispel various rumors that he was being held hostage by his housekeeper and that he was undergoing gender reassignment surgery.

“Richard is eternally grateful for the continuous outpouring of love and gratitude he has received from across the globe,” Estey continued. “He is happy, healthy, and living the life he has chosen to live.”

According to the documentary the actor’s sudden shunning of the spotlight was caused by knee issues.

The new doc indicates that Simmons retired from the public eye due to a lifelong congenital deformity in one of his feet.

“Something that happened to him at birth is directly connected to his disappearance — a birth defect that significantly affected one of his legs,” TMZ managing editor Fabian Garcia declared in the doc. “He was born without a full set of bones in his foot and it causes physical and emotional problems.”

I understand why so many of us want to know what happened to make Richard Simmons leave public life. But the man gave us a LOT for so many years. He deserves to be left alone if that’s what he chooses. Be grateful and give him peace.

However, many fans responded to Simmons’ Facebook message in support after learning that he was healthy and happy.

One fan wrote, “I’m so proud of you for taking time for yourself. You’ve given so much of yourself to the world, and now it’s your time. Good for you Thank you for blessing and inspiring me so richly.”

Another supporter of the ’80s icon added, “You have been such a wonderful human, with so much compassion and care for so many people. The world loves you. I hope you are enjoying your time to yourself now, and have everything you could ever want, because you deserve that.”

Senator's CONTROVERSIAL Ad Has Dems UP IN ARMS 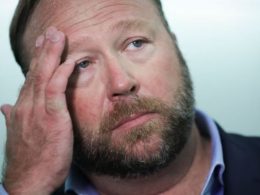